What if…? Episode 4 Recap: From Doctor Strange Going Dark to the Depressing Ending, 7 Things That Happened in Marvel’s Animated Disney+ Series (SPOILER ALERT)

What If…? Had its fourth episode premiere and it featured Stephen Strange going down a dark path. Boasting the voices of Benedict Cumberbatch, Tilda Swinton and Benedict Wong, this episode of What If…? saw Stephen Strange lose Christine Palmer and in an effort to resurrect her 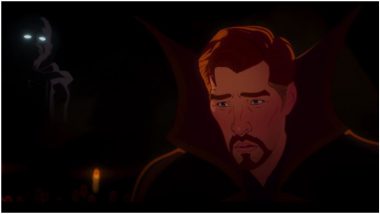 A Still from What If...? Episode 4 (Photo Credit: Twitter)

What If…? had its fourth episode premiere and it featured Stephen Strange going down a dark path. Boasting the voices of Benedict Cumberbatch, Tilda Swinton and Benedict Wong, this episode of What If…? saw Stephen Strange lose Christine Palmer and in an effort to resurrect her, he goes down a dark path. The only catch here being that only he himself is strong enough to stop him and the fate of the entire universe is at hand here. What If…? Episode 3 Recap: From Major Avenger Deaths to Killer Reveal, 11 Major Twists from the Recent Episode of Marvel’s Animated Series.

The episode was very dark in nature and featured probably one of the most depressing storylines for its main character. A Multiverse of Sadness if one may say so (ok that was a bad joke just ignore it).

So with all this out of the way, let’s look at all the spoilers from the fourth episode of What If…?

In an occasion of celebration, Strange picks up Christine Palmer for a date from her house. In a turn of events, instead of losing function of his hands, Strange has an accident and ends up losing Christine instead, Thus kicking off the events for this episode.

Going Back in Time

We then get a montage of similar events from Doctor Stranger, at the end of it we see Stephen grieving Christine. With the time stone in his hand, he decides to travel back in the past and save Christine from the accident.

We are then greeted to a montage of Christine dying over and over again with Strange failing to save her every time. The Ancient One then meets Strange and tells him to put a stop to this as Christine’s death is an absolute point in the timeline, and that can’t be changed. Strange refuses to do so and travels back further in time to the Library of Cagliostro in search for answers. Marvel’s What if…? Episode 2 Recap: From Chadwick Boseman’s Take on Star-Lord to Thanos’ Return, 9 Plot Twists That Happened in Disney+ Animated Series!

The Library of Cagliostro

At the library, Strange starts to become a power hungry version of himself who keeps on devouring creatures to become stronger and stronger. All of this he does is in efforts to prevent the death of Christine Palmer and change an absolute event in the timeline.

A Turn of Events

We then see Strange again in the present day where he is about to travel back in time, but makes a last minute decision of not doing so. He goes outside to see his universe in the process of being erased and is met by The Ancient One. Here The Ancient One tells him that she split the timeline of both the Strange’s so he never goes down the path. Stephen is then tasked with taking down the power hungry version of himself.

In a strange set of events (pun totally intended), Strange travels back to defeat Strange supreme. What follows is an impressive fight scene that sees both of them utilize magic in order to defeat each other. Strange Supreme unfortunately defeats the Sorcerer Supreme and absorbs all his power.

The Watcher Breaks the Rule and The End of the Universe

Strange is successful in resurrecting Christine but puts the fate of the entire universe at risk. He then directly talks to The Watcher who tells him that there is no way that he can interfere as that would put even more worlds at risk. The end of the universe takes place and in the final shot we see Strange trapped all alone inside a bubble.

Marvel Studio’s What If…? streams every Wednesday at 12:30pm on Disney+ Hotstar.

(The above story first appeared on LatestLY on Sep 01, 2021 03:33 PM IST. For more news and updates on politics, world, sports, entertainment and lifestyle, log on to our website latestly.com).