JL50 is streaming on Sony LIV from September 4, 2020. It stars Abhay Deol and Pankaj Kapur along with others. 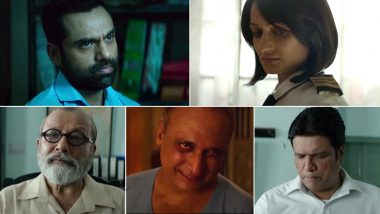 Abhay Deol and Pankaj Kapur starrer JL50's trailer is out. The thriller that will stream on Sony LIV  is based on the real-life incident of a plane crash that was found in a wrecked state later. After a promising teaser, the makers are back with more content through the trailer and it looks only more thrilling. In the newly released video, Abhay is seen determined to go to the depth of the case. Abhay Deol Shares a Post Calling Out Raanjhanaa for Being 'Regressive', Says 'History Will Not Look Kindly At This Film’.

He questions about the plane that went missing 35 years ago, which left from Kolkata on time. However, after 35 years, the remains are found and that leaves him baffled. He goes to any and every end to crack this mystery. He is seen going through the evidences that he terms as 'fake.' He also tries to get into the touch with the survivors of the crash. The conversation also revolves around 'does time machine exist!' Take a look at the trailer below.

The series is directed by Shailender Vyas and will stream on the digital platform from September 4. The flick is definitely one of the best ones for the week that fans can opt to watch. Do let us know your thoughts on the same.

(The above story first appeared on LatestLY on Sep 02, 2020 11:46 PM IST. For more news and updates on politics, world, sports, entertainment and lifestyle, log on to our website latestly.com).