While no details about the film have been shared with us, we do know that Katrina will be headlining India's first female-led superhero flick. The title of the film has also been locked reportedly. The director recently finished the recce of the film as well. 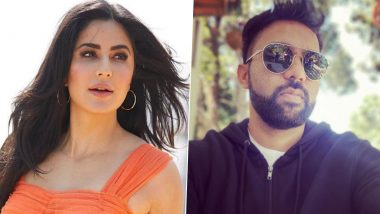 Katrina Kaif and Ali Abbas Zafar are a hit Jodi. Whenever the director-actor Jodi collaborated for a project, the two make sure they entertain the audience to the fullest. The two worked in Bharat together the last time along with Salman Khan and created quite the hype around the film. Soon after the release of the film, Ali Abbas announced his next collaboration with Katrina and revealed that she will be seen in a superhero avatar in the film. Katrina Kaif's Superhero Movie with Ali Abbas Zafar May Go On Floors in January 2021, Actress Starts Prepping for It.

While no details about the film have been shared with us, we do know that Katrina will be headlining India's first female-led superhero flick. The title of the film has also been locked reportedly. The director recently finished the recce of the film and is now spearheading towards getting the film in its production phase.  As per the report, the makers have finalised places like Dubai, Abu Dhabi, Poland, Uttarakhand and Georgia for the shoot.

Coming back to the title, according to reports by Bollywood Hungama, the film will be titled 'Super Soldier'. Katrina had already begun prepping for her role in the film. Ali Abbas had earlier told that Katrina will have to look different for her superhero role and she has started taking physically training for it. Katrina would be shooting for the film after wrapping up her prior commitments.

Ali had also revealed that the film will solely be headlined by Katrina Kaif. He added that she is the hero of the film and they are not planning to have a male lead for it. There also won’t be any romantic tracks in the movie. Katrina will be undergoing martial arts training before the film goes on the floor. Ali Abbas Zafar Opens Up on His Bond With Katrina Kaif, Says 'Katrina and I Are Like Chalk and Cheese'.

Apart from this project, Katrina will be seen alongside Ishaan Khatter and Siddhant Chaturvedi in Phone Bhoot. The film will be helmed by Gurmeet Singh. She also will be seen with Akshay Kumar in Rohit Shetty's next titled Sooryavanshi. Tiger Zinda Hai 3 is also in the pipeline and hopefully we will see Katrina with Salman again.

(The above story first appeared on LatestLY on Dec 08, 2020 07:23 PM IST. For more news and updates on politics, world, sports, entertainment and lifestyle, log on to our website latestly.com).