Kang Daniel Birthday: The Kpop Idol Performed In India, Hummed Mera Piya Ghar Aaya And You Had No Clue About It (Watch Videos) 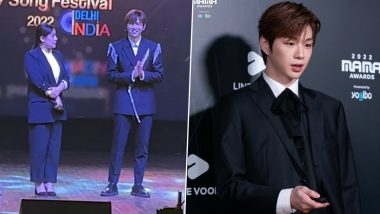 Kang Daniel is a jack of all trades and a master of the rest. The winner of the second season of the survival musical show Produce 101 and a member of the now disbanded Wanna One, Daniel is just an outstanding artist. His fans are super proud of him and some of them are in India too. But what you may not be aware of is that Daniel was in India last November. Choi Woo-shik, EXO’s DO, Park Bo-gum - 7 K-drama Romantic Heroes Who Turned Deliciously DARK!.

Yes, you read it right. The South Korean K-pop idol Kang Daniel performed at an elusive gathering of senior officials at the 59th Asia-Pacific Broadcasting Union in Delhi last November. It was a closed-door event and Prasar Bharti ensured there wasn't much fanfare around his trip. Given the way K-pop has boomed in India over the last couple of years, his visit wouldn't have been a close-guarded secret. But the organisers apparently managed, as per an article on The Print.

But guess what? We managed to scoop up some videos for you to know how his fans managed to sneak into the audience and yelled 'Let's go together' in Korean after his performance. Song Hye kyo in Glory, Jung So-min in Alchemy Of Souls: 5 Kdrama Good Girls Turned Bad in 2022

Check out the videos here:

And here comes the performance

my hands are still shaking omg he killed the performance #KANGDANIEL pic.twitter.com/dGsPvgCGMW

Daniel, we want an encore and as soon as possible.

(The above story first appeared on LatestLY on Dec 10, 2022 09:40 AM IST. For more news and updates on politics, world, sports, entertainment and lifestyle, log on to our website latestly.com).