The song features some candid footage from Machine Gun Kelly's life ahead of the release of his Tickets to my Downfall album and we get to see quite a lot of Megan Fox in it. 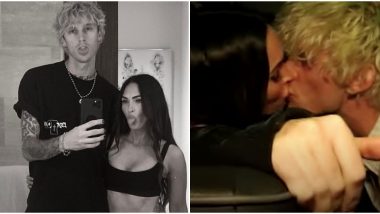 Megan Fox and Machine Gun Kelly have been packing PDA ever since they made their relationship official earlier this year. After featuring in Machine Gun Kelly's "Bloody Valentine" music video, girlfriend Megan Fox has once again appeared in her boyfriend's music video and this time it is for the song "Drunken Face". The song features some candid footage from Machine Gun Kelly's life ahead of the release of his Tickets to my Downfall album and we get to see quite a lot of Megan Fox in it. One of the biggest highlights of the video is that MGK and Fox are seen getting cosy and kissing in one of the clips. Megan Fox and Brian Austin Green Part Ways After 10 Years Of Marriage, Confirms the 46-Year-Old Actor.

In the video, the couple share a passionate kiss and one has to agree the couple's adorable chemistry is beyond amazing. Apart from this, the other footage also shows the couple boarding a private plane, Megan painting MGK‘s nails, and also the duo surrounded by paparazzi as they leave whilst holding hands together. The couple made their relationship official on social media after Kelly shared an Instagram selfie with Fox in July.

Earlier in an interview, whilst speaking about his romance with the Transformers actress, Kelly was quoted saying, "Didn't know what [love] was until me and her made eye contact." The musician also confirmed that it was almost love at first sight for him after meeting Megan Fox. Megan Fox, Machine Gun Kelly Spotted Holding Hands During Date Night in Malibu.

This is the second music video of Kelly that features Megan Fox, in the "Blue Valentine" video, the actress was seen taping Kelly's mouth shut with a pink duct tape as she sang along to the lyrics.

(The above story first appeared on LatestLY on Sep 30, 2020 10:11 AM IST. For more news and updates on politics, world, sports, entertainment and lifestyle, log on to our website latestly.com).