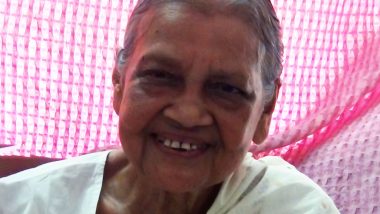 Eminent Indian classical singer Sunanda Patnaik, who had carved a special identity in Odia music world, passed away on Sunday following a prolonged illness, family sources said. She was 85. Popularly known as "Guguma", Patnaik was undergoing treatment at a private hospital in Kolkata where she breathed her last on Sunday morning, the sources said. Daughter of legendary Odia poet Baikunthanath Patnaik, the veteran singer was born on November 7, 1934, and started her career in singing at the All India Radio, Cuttack in 1948 at the age of 14. Ritu Nanda Dies at 71: Rishi Kapoor’s Sister Passes Away in Delhi, Was Suffering From Cancer.

A host of distinguished dignitaries including Odisha Chief Minister Naveen Patnaik and Union Petroleum and Steel Minister Dharmendra Pradhan have condoled the demise of the renowned singer. Hailing her as a tall figure in the world of Indian music, the chief minister said she dedicated herself to music all through her life and her contributions will keep her immortal. "In the demise of this great artist, a bright light in the world of Indian culture has gone out," the CM said in a message. Manmohan Mahapatra, National Award-Winning Filmmaker From Odisha, Dies at 69.

Expressing profound grief over the passing away of Sunanda Patnaik, Pradhan said her contribution to the world of classical music will be remembered forever. A singer of Gwalior gharana, Patnaik was honoured with Odisha Sangeet Natak Akademi award in 1970 and 1971. She received Indian lifetime achievement award in 2009 and lifetime achievement award from The Orissa Society of the Americas (OSA) in 2012.

Recipient of sangeet natak academy award (Tagore Akademi Puraskar) for the year 2012, she was conferred degree of doctor of literature by the Utkal University in 1999 and degree of doctor of music by Akhil Bharatiya Gandharva Mahavidyalaya Mandal in 1975. Known for singing at a high pitch and for her interpretation of Odissi music, Patnaik was known for singing Shri Jagannath Stotras in a melodious style.

Having been trained under Pandit Vinayak Rao Pattavardhan at Pune with a scholarship, she was awarded the degree of Masters in Music by Pune School in 1956. She had also performed at All India Sadrang Sangeet Sammelan in Calcutta in September 1957.