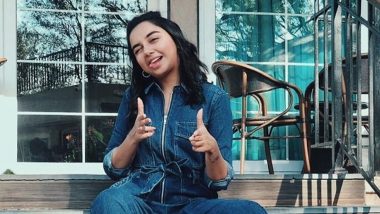 Indian YouTube sensation Prajakta Koli has made her acting debut with the short film "Khayali Pulav". In the film, she essays the role of the lead female protagonist, based on a 17-year-old small town girl who instead of focussing on her government school education, pursues a vocation in sports. The film navigates between her struggles as an amateur handball enthusiast to her triumph in breaking traditional stereotypes. "Khayali Pulav" is written and directed by Tarun Dudeja. "Growing up and then through my everyday interactions I noticed how prejudiced we are as a society when it comes to girls and women in general. This film is my small contribution to society at large to facilitate change at whatever level I can and influence mindsets positively," Prajakta said. YouTuber Prajakta Koli Is Happy to Represent India in Virtual Graduation Ceremony Headlined by Barack Obama

"It's amazing to essay this young girl who knows her dream is too scandalous for the dwelling she is raised in, but her forward thinking temperament to rectify a generalised mindset has enabled her to become resilient and determined. The film is a beautiful reminder of how dreams, especially in small towns, are often realised through sports. It's also a reminder of how precious the freedom to live your life the way you want to is, how even the seemingly simple act of being able to wear shorts becomes a complicated mission for a young girl. The act of being a sportsperson is her excuse to live as a free woman who isn't defined by the opinion of others, and confidently dresses up in shorts baring her legs in a society that expects her to cover up," she added. YouTuber Bhuvan Bam and TVF’s Arunabh Kumar Come Up with an Awareness Initiative to Help the Daily Wage Workers During COVID-19 Crisis

Set against the rural landscape of Haryana, the film runs to a duration of 24 minutes. It touches upon themes like inevitability of freedom of choice, banishment of prejudices and importance of street hustle. Actor Yashpal Sharma plays the lead male protagonist, as a sports teacher. Talking about the film, Tarun Dudeja said: "Being born and brought up in one of the towns in Haryana, India where patriarchy is the accepted norm and tradition is associated with the women staying behind the veil, I would come across subtle acts of resistance to oppression every now and then.

In the conservative society women just seize at whatever semblance of freedom could be contained within the constraints of the society but mostly it is aimed at freedom. Be it freedom to express themselves, or choose their partner, or wear the clothes of their choice. For these women, these little acts make their lives more bearable in an intolerant institution. They fight in their quiet ways and refuse to become victims of the circumstances.

Their spirits remain uncrushed and they win a certain degree of independence for themselves. The film honours such women and is a tribute to them". Casting director Mukesh Chhabra has worked on the casting of the movie. Chhabra feels the "film is a very sweet take on women's empowerment at a very basic level". The film, produced by One Digital Entertainment, released on July 9 on Prajakta's YouTube channel.

(The above story first appeared on LatestLY on Jul 09, 2020 05:15 PM IST. For more news and updates on politics, world, sports, entertainment and lifestyle, log on to our website latestly.com).