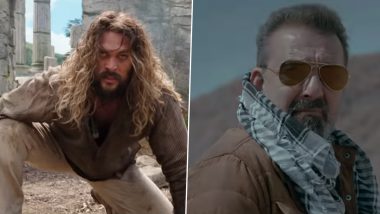 The first trailer for the Netflix film, Torbaaz, released on the internet. In the movie, Sanjay Dutt plays the cricket coach to Afghani kids. But the trailer for this explosively upgraded Lagaan sounds a bit too similar to something. The background music playing in the trailer was taking my attention away from scenes of explosions and Dutt teaching kids about cricket played on screen. It might take anyone a few minutes to realise that the BGM used in Torbaaz trailer is literally the same music used in Jason Momoa's Aquaman extended trailer. Torbaaz Trailer: Sanjay Dutt Is Back, Will Play A Determined Cricket Coach In This Netflix Action Drama (Watch Video).

So, is this another case of Bollywood blindly copying the West? Some viewers in the comments section also pointed out the similarity in background music. But that's NOT the case! In fact, it is a positive direction for the Hindi cinema that Torbaaz sounds similar to Aquaman.

Aquaman extended trailer uses a music piece by Audiomachine - the music company was found to curate music for Hollywood trailers and advertisements. The music you hear in the background of trailers for films like Avengers: Endgame and Infinity Was was composed by Audiomachine. Most recently, the music in Black Widow trailer was "We Are Gods" produced by them.

Over the years, the company also released a few albums and their first commercial release was Volturnus in early 2018, which also had the number, "Watch The World Burn".

In October 2018, "Watch The World Burn" was used by the aplomb Aquaman extended trailer. It was a 5 minutes long trailer, which not only featured an insane number of action stunts including one epic chase sequence. Jason Momoa's Aquaman 2 Will Not Go On Floors in 2020, Principal Photography To Begin Mid-2021.

If anything, Sanjay's Torbaaz has become the first Bollywood film to use a piece by the globally popular Audiomachine. Maybe. we will start using better music for Bollywood movies here onwards.

(The above story first appeared on LatestLY on Nov 23, 2020 10:33 AM IST. For more news and updates on politics, world, sports, entertainment and lifestyle, log on to our website latestly.com).