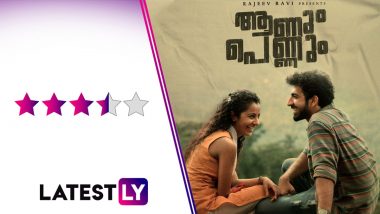 Aanum Pennum Movie Review: After Ray, we are in luck to see yet another anthology this time from critics' favourite film industry these days - Malayalam Cinema. If the Netflix series was a tribute to the late Satyajit Ray by adapting his short stories, then Aanum Pennum is about male-female relationships and pays ode to the strength of feminism set strikingly against the flawed masculinity. Releases in theatres on March 26, Aanum Pennum has finally arrived on Amazon Prime Video, and since this critic isn't as gutsy as some of the ladies in the movie, he chose to wait and watch the movie from the safe confines of his home. Ray Review: Manoj Bajpayee, Harsh Varrdhan Kapoor's Netflix Anthology Gives a Kickass Tribute to The Great Master Storyteller.

Aanum Pennum has three segments, each directed by Jay K, Venu and Aashiq Abu, and are set in different time periods. The first is Jay K's Savithri (written by Santhosh Echikkanam). Set during the post-independence period during the Naxalite movement in Kerala when the feudal lords and the police were hunting down the Communist leaders, who had gone underground.

The segment follows a young woman (Samyukta Menon) who seeks solace in an ancestral mansion as a domestic help and falsely gives her name as Kochu Paaru. While trying to evade the law with her new identity, the woman also has to escape from the lusty advances of her feudal employer Raghava Pillai (Joju George). His younger brother Vasu Devan (Vineeth Vishwam) is also enamoured by her beauty.

Savithri, however, doesn't make our protagonist a victim. Rather she is a survivor, even using her sexuality to escape from sticky situations. There are shades of Manju Warrier's Bhadra from Kannezhuthi Pottum Thottu in her character.

While the period setting and the protagonist's uncomfortable work setting raise intrigue, the segment, as a whole, is merely passable. It has no qualms in accepting its inspiration from the Mahabharata tale of Keechakavadham, But shoving the inspiration in a triple metaphor, first as a folktale that an old woman tells her grandkids, then a Kathakali play on the same and finally, what happens to the main characters, feels so heavy-handed.

As far as the performances go, Samyuktha is decent, if not a little stiff in the role. Joju George does the pervy feudal lord's role as expected, though the character doesn't offer the actor much scope. Indrajith Sukumaran plays an underground Communist leader that leaves limited impact.

After an average start, Aanum Pennum moves to its next segment, Rachiyamma. Written and directed by Venu (who also handled the cinematography), Rachiyamma is also a period piece, but set in the '70s era. Kuttikrishnan (Asif Ali) returns to a tea plantation where he once worked after learning about his former employer's demise. There, he encounters Rachiyamma (Parvathy Thiruvothu), the reason why he left the job in the first place.

The segment then explores the once heartwarming bond between the bold, feisty, self-dependent Rachiyamma and the kind-hearted but insecure Kuttikrishnan, who falls for her caring nature. What happens later between the two might not be anything earth-shattering, but works because of tender manner in which their scenes are handled. Especially the finale. It's touching and heartbreaking at the same time.

Rachiyamma is a big improvement from the first short, with its striking feature being, indubitably, Parvathy's character and her performance. Be it her slang, her confident body language and the myriad of expressions on her face, Rachiyamma is just another fine example of how Parvathy is surely becoming one of this country's best performers.Let me scratch that. I believe she is already in that league!

As the soft-spoken and timorous Kuttikrishnan, Asif Ali delivers a likeable performance, capturing the conflicting emotions of the character really well.

The final segment of Aanum Pennum is Rani, that is directed by the in-form Aashiq Abu and is based on writer Unni R's short story, Pennum Cherukkanum. Set in the present times, Rani is a refreshing and relatable take on modern love that takes some surprising turns. The protagonists don't have names. Roshan Mathew's character is referred in the credits as Aan (boy), while Darshana Rajendran's is Pen (girl). They are college sweethearts, who might be at the starting phase of their relationship where hormones are controlling basic intellect.

Aan wants to get intimate with Pen, so he tries to convince her to come with her to a forest area where they can have privacy to do, you know, things. Pen is curious as to why Aan needs to go so far to show physical display of love when he avoids such acts at college. Finally he manages to break her rigid stance, and they go off for the trip, that doesn't go exactly as per the boy's intentions. Aashiq Abu Birthday Special: From Daddy Cool to Virus, Ranking All Feature-Length Movies of This Acclaimed Filmmaker From Worst to Best.

After Mayanadhi, Aashiq Abu once again displays how well he gets the pulse of young, flawed romance that is high on lust and low on love. You could relate to quite a few moments in the segment, if you have had your share of relationships.

At the same time, it also pokes fun at male toxicity without going overboard. When the girl asks her manipulative lover frankly if he loves her more or her body, at first, he makes faces, tries to avoid answering and then like any weak-opinionated person, choose to rely on the holy scriptures to get him out of the sticky situation. This too, after the girl assures the boy that his answer won't affect their moment. It is really nice to see such a frank and bold depiction of a female antagonist who unwaveringly hold fort against cinema's usual concept of a demure heroine. That doesn't change even when the situation turns bad, while her self-made protector breaks into tears.

Another huge positive for the segment is the incredible chemistry between Roshan and Darshana, both excellent in their roles. Shyju Khalid's camerawork aesthetically captures some of the more risque shots in the segment. Risque, for a Malayalam mainstream movie, that is!

A bigger surprise is seeing the veteran pair of Nedumudi Venu and Kaviyoor Poornima in characters you least expect them to be. Talk of changing times! Basil Joseph is hilarious in the short screentime he has. All in all, a story that would leave you arrested, surprised and shocked in a very good measure.

PS: Strangely, though, while Aanum Pennum is about celebrating the gutsy spirit of womanhood, I wonder why there isn't a segment by a female director in the mix?

In contrast to its gender-arbitrative title, Aanum Pennum celebrates the strength of womanhood through two fine short segments, and one average one. With surprise-laden narratives and terrific performances, add this one to your weekend watchlist. Aanum Pennum is streaming on Amazon Prime Video.

(The above story first appeared on LatestLY on Jul 01, 2021 12:42 PM IST. For more news and updates on politics, world, sports, entertainment and lifestyle, log on to our website latestly.com).