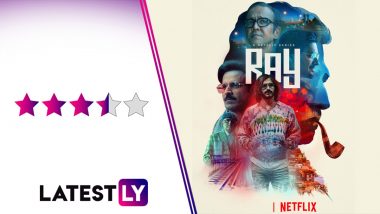 Ray Review: Sorry if my use of swearing left you outraged, but the great Satyajit Ray was a f**king legend! His movies are masterpieces, alright, but it's my unpardonably late discovery of how fantastic a storyteller and writer he is that made me look at this brilliant man with a renewed respect. During the lockdown, it was his writings and short stories that did an immense job of reducing my frustration. His grasp on the genres of science fiction, horror and fantasy made me wonder why India never had a Twilight Zone saga purely based on Ray's short stories. Ray: Before Netflix Series Arrives, 10 Awesome Short Stories of Satyajit Ray You Should Not Miss Out on Reading!

So I was one of the many jubilant ones over the announcement that Netflix is adapting four of his popular stories for its anthology. With talented directors like Abhishek Chaubey, Srijit Mukherji and Vasan Bala on board, the expectations got higher. Now that I have watched it, have to say, Ray gives the legend the effing respect he absolutely commands.

That said, all the segments in Ray aren't page-to-page adaptations of the stories, which make them retain their own identities. Starting off Sreejith Mukerji's two segments, both shorts strip off the pulpy fun of their inspirations and turns them darker and sinister.

Forget Me Not (based on Bipin Chowdhury'r Smritibhrom) has Ali Fazal play Ipsit Nair, a go-getter dynamic partner in a company, who is proud of how sharp his memory is. He merely smirks in agreement when a friend tells him that his brain is like a computer who treats memories as data.

So when a stranger (Anindita Bose) accosts him at a lounge and tells them of a fling they had a couple of years back at Ajanta, Ipsit is shocked. As hard as he tries, he just can't place either her or the lusty encounter. More than not remembering the girl, it is perhaps the fact that his memory is being challenged that hurts Ipsit the most. Soon cracking that forgotten memory not only damages  Ipsit's relationship with his wife but also at his workplace and daily routine.

The segment does a decent job of keeping up the suspense alive as to why Ipsit could not remember the girl. In the process it peels off layers from Ipsit's suave exterior, to show the real hidden character within, which honestly feels kinda predictable. However, Ali Fazal does a fine job in showing the various dimensions of his character. Another standout performer here is Shweta Basu Prasad as his secretary Maggie. However, the climax felt more of a drag.

Moving on to Srijit's next - Bahrupiya (based on Bahurupi) stars Kay Kay Menon in the lead. Menon is Indrashish Shah, a meek clerk who also works as a makeup man for his lover, an actress (Bidita Bag). However, neither she is interested in marrying him nor is he any good at his workplace, while Indrashish also gets bullied by his landlord. His luck changes when a surprise windfall arrives in form of money bequeathed upon him by his recently departed grandmother. But money isn't the only legacy she left behind for him.

As the name suggests, the segment allows a fine, versatile actor like Kay Kay Menon, who is terrific here, to take on various personas in the process of settling scores against those who had hurt his character. Like with the earlier segment, Bahrupiya is much darker than its source, and turns it better changing the personality of the protagonist to make his intentions far more layered. The best scenes in the film involve Indrashish trying to test a powerful baba (Dibyendu Bhattacharya, smashing it out of the park), which I feel is better done than how it was written in the original story. The sinister ending would come as a shocker to those not aware of how Ray's story ended!

Moving on to the next, we have Abhishek Chaubey adapting Barin Bhowmick's Ailment into Hungama Hai Kyon Barpa. This is the closest Satyajit Ray's adaptation, as Chaubey doesn't really take any detours and stick to what the OG tale had to offer. Bajpayee plays Musafir Ali, a popular ghazal singer (the title comes out a ghazal he sings) who undertakes a train journey in a first class compartment. He finds his fellow travel companion (Gajraj Rao) to be familiar, and realises that he had committed something bad to him 10 years back. While the other person doesn't recognise him, Musafir is consumed with the guilt and apprehension that he will be caught any moment.

Is there any genre called psychological comedy? If there is, it could quite apply to this one. Hungama Hai Kyon Barpa is the most light-hearted effort of the director known for making Ishqiya series, Udta Punjab and Sonchiriya. While Hungama Hai Kyon Barpa is faithful to its source to a major extent (save for that hilarious but apt climax that goes beyond the source's final twist), the director merely relies on his two amazing performers to elevate it to great heights while adding his own narrative quirks (the clock setpiece was nicely done). Bajpayee is absolutely having a blast as the ghazal singer with a 'disease' he just can't remember, his mannerisms and dialogue delivery incredibly amazing. Gajraj Rao gives perfect companion act to Bajpayee's fine turn. Also watch out for Raghubir Yadav and Manoj Pahwa's supporting turns! This is by far, my most favourite one! OTT Releases Of The Week: Manoj Bajpayee’s Ray on Netflix, Swwapnil Joshi’s Samantar Season 2 on MX Player, Kristen Bouchard’s Evil Season 2 on Voot and More.

Vasan Bala's Spotlight is based on the story by the same name. Actually I had difficulty recalling this story and even after I watched the segment couldn't remember reading this one. It's only when I went back to my Satyajit Ray collection and revisited this tale is then that I realised that Vasan Bala has only used the story as an 'inspiration' rather than a straight adaptation (I believe Spotlight is an amalgamation of two Satyajit Ray stories).

So here we have Harsh Varrdhan Kapoor play a superstar Vikram Arora, who along with his Man Friday Robby (Chandan Roy Sanyal, fantastic foil) goes to a hotel to shoot for his next film. While he is a hit at the box office, Vikram's entire USP is depended on one thing - his trademark 'look'. And he is annoyed by the fact that he is not being taken serious as an actor, except for that look.

To add to his annoyance, he finds his spotlight at the hotel being stolen by the arrival of Didi, a much-revered religious figure. Vikram is irked that the hotel employees, his film unit are all ardent devotees of this god-lady, and this irritation affects the one thing that makes for what he is as a performer.

If you are familiar with Vasan Bala's Mard Ko Dard Nahi Hota, you know his love for the pulpiness of Bollywood. This aspect is not lost when you watch Spotlight, that is way too meta than you would realise. The segment is self-aware in every essence and relishes in the black humour the opportunity offers. From the interesting casting of Kapoor in the lead to various Bollywood and Hollywood references, Bala pours enough Easter Eggs and self-nods in his segment. Like Kapoor's Vikram is more an extension of the actor here - something we already saw last in year in his scene-stealing turn in AK vs AK.

I wish I could say Kapoor has improved as an actor here, but the short doesn't bother with that (Vik's girlfriend, played by Akansha Ranjan, calls him a 'bad actor'). It just allows him to be how he is, and Kapoor does good in the scenes where he ramps up his eccentricities. You certainly couldn't hold in a chuckle when Vik self-elevates his trauma from a Kafkaesque nightmare to a Lynchian one, even though he has no clue what they even mean!

Why Vasan even turns up in his own segment as a director, trying his best to get a good performance from his actor. I mean, how much more meta can you go!

The short also raises some pertinent societal observations like that while movies have the glam, it can never truly topple religion as the opium that the country is already high on.

The middle portions of Spotlight do get slow as it tries to capture Vik's increasing frustration in earning back the attention he lost to the unseen Didi. However, the segment goes all bonkers in true MKDNH style in the climax, which makes it all worth it. And yeah, watch out for the performance by Radhika Madan too!

PS: Not sure how many remember this, but the best segment in another anthology series, Bombay Talkies, the one directed by Dibakar Banerjee, was also inspired by one of Satyajit Ray's short stories.

Though not all shorts work the way you expect them to be, Ray manages to not only pay obeisance to one of the greatest storytellers of World Cinema, but also occasionally went onto to improve from its source. Good direction, compelling narration and excellent performances make this series worth a watch. Especially Bajpayee and Harsh's shorts. Ray is streaming on Netflix.

(The above story first appeared on LatestLY on Jun 25, 2021 01:19 PM IST. For more news and updates on politics, world, sports, entertainment and lifestyle, log on to our website latestly.com).