A unit member of Acharya has recently confirmed Rashmika Mandanna's inclusion in the star cast of Acharya. The film has Chiranjeevi and Kajal Aggarwal in the lead and Ram Charan will have a cameo in it. 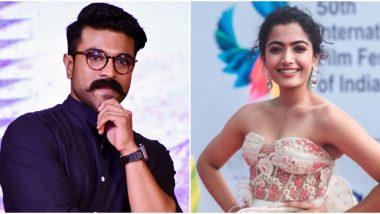 After discussing tons of other names including the ones from Bollywood, makers of Acharya may have roped in Rashmika Mandanna as the second female lead. The Dear Comrade has apparently come on board and will romance Ram Charan in it. The film that stars megastar Chiranjeevi and is mounted on a big-budget also has Kajal Aggarwal in the lead. The shooting of the film is expected to resume very soon and once it starts, Mandanna will join the star cast for her scenes. Trisha Walks Out Of Chiranjeevi's Acharya Citing 'Creative Differences' - Read Tweet.

As per new reports, a unit member from Acharya has confirmed  Rashmika Mandanna's inclusion. Considering the film is being helmed by Bharat Ane Nenu director, Koratala Siva, there were rumours if he'd cast Kiara Advani once again. The duo had previously collaborated for the Mahesh Babu starrer and Kiara had even romanced Ram Charan in Vinaya Vidheya Rama. While the film has Chiranjeevi in the lead, Charan merely has a cameo in it. Acharya: Chiranjeevi and Kajal Aggarwal's New Movie to Hit the Screens on This Date?

Rashmika is currently busy with Allu Arjun's Pushpa. Earlier there were reports of Chiranjeevi having a discussion with SS Rajamouli to finish his shooting with Ram Charan in RRR.  That would have enabled the Yevadu actor to allot his dates for Acharya. However, with Rajamouli and family testing positive for coronavirus, their plans of resuming the shooting went for a toss. An official update on the new schedule of RRR is now awaited.

(The above story first appeared on LatestLY on Sep 11, 2020 09:08 AM IST. For more news and updates on politics, world, sports, entertainment and lifestyle, log on to our website latestly.com).