Adipurush: Ajay Devgn Not A Part Of Prabhas Starrer?

Adipurush is the upcoming magnum opus helmed by Om Raut. This film will feature Prabhas and Saif Ali Khan in the lead. 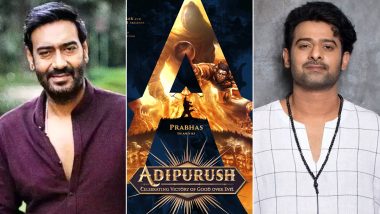 Adipurush is the upcoming magnum opus helmed by Om Raut. This film will feature Prabhas and Saif Ali Khan in the lead. Prabhas would be seen playing the role of Lord Ram and Saif Ali Khan would be seen as the antagonist, Lankesh. Movie buffs are thrilled to see this duo share screen space and the excitement was sky-high when the buzz started doing rounds that Ajay Devgn would also be joining this period saga. However, according to latest reports, Ajay Devgn is not a part of Adipurush. Here’s What Baahubali Director SS Rajamouli Has To Say About Prabhas’ Role As Lord Ram In Adipurush.

Reports were rife that Ajay Devgn would be essaying the role of Lord Shiva in Om Raut directorial Adipurush. But a source revealed to Bollywood Hungama, “After Saif’s name was announced, many thought that Om Raut will reunite with his Tanhaji – The Unsung Warrior lead actor Ajay Devgn as well in Adipurush. However, there’s no truth to these reports. Ajay is not a part of Adipurush. He already has too many films on his plate.”

Talking about Ajay Devgn’s upcoming projects, the source further mentioned, “He has 10 days work left on Sanjay Leela Bhansali’s Gangubai Kathiawadi. He has to complete the remaining shoot of Bhuj – The Pride Of India so that it’s ready for release on Disney+ Hotstar. And then he has to film for a major schedule of Maidaan. Not to forget, he also needs to focus on the films produced under his banner.” Adipurush: Kareena Kapoor Khan Cheers For Husband Saif Ali Khan's Casting as Lankesh.

The makers of Adipurush are eyeing a massive 2022 release. The film will be shot as a bilingual in Telugu and Hindi and would be dubbed and released in other languages as well.

(The above story first appeared on LatestLY on Oct 20, 2020 11:06 AM IST. For more news and updates on politics, world, sports, entertainment and lifestyle, log on to our website latestly.com).