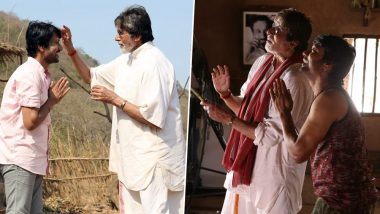 We had recently seen pictures of Amitabh Bachchan from the sets of his upcoming Tamil-Hindi bilingual. The actor was spotted wearing a veshti in the pictures along with actor SJ Suryah. The film's title has now been confirmed and it is called, Tera Yaar Hoon Main. The film will also star Ramya Krishnan in a lead role. Recently, the veteran actor even took to Instagram to share a picture of him from the sets of the film along with Abhishek Bachchan. He even called his son his "dearest friend" in this post.

The shooting of this bilingual film began a couple of days ago. The film revolves around a cosmic connection that brings two strangers together. It was because of this storyline that the film's name was confirmed as Tera Yaar Hoon Main. The title certainly seems inspired by the song that featured in the Kartik Aaryan starrer Sonu Ke Titu Ki Sweety. Amitabh Bachchan Surprises Fans by Tweeting in Tamil, Shares Two Pictures From the Sets of Uyarntha Manithan!

Check out the tweet on Tera Yaar Hoon Main:

Director Tamilvanan recently informed in an interview that he was hopeful about getting a nod for the film from Big B. He further mentioned that the believed that the film's script had the potential to convince Amitabh Bachchan to be a part of it. The veteran actor had earlier shared a post about his film and he even tweeted in Tamil which left his fans surprised and he also gave them a glimpse of his look in the film which looks intriguing. Amitabh Bachchan, Ramya Krishnan Reunite After Two Decades in 'Uyarntha Manithan'.

The film is currently being shot in Mumbai. A release date of the film is yet to be announced but we bet fans are super excited to see Amitabh Bachchan pull off his magic in the Tamil-Hindi film.

(The above story first appeared on LatestLY on Apr 08, 2019 11:44 AM IST. For more news and updates on politics, world, sports, entertainment and lifestyle, log on to our website latestly.com).