Filmmaker SS Rajamouli gave the mahurat clap for Telugu actor Bellamkonda's Hindi remake of the film Chatrapathi here on Friday. The yet-to-be titled film will be directed by VV Vinayak and is going to be a mass action entertainer. 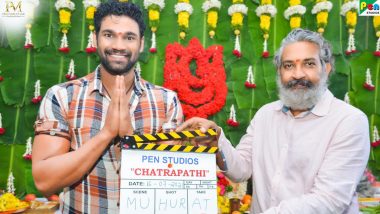 Filmmaker SS Rajamouli gave the mahurat clap for Telugu actor Bellamkonda's Hindi remake of the film Chatrapathi here on Friday. The yet-to-be titled film will be directed by VV Vinayak and is going to be a mass action entertainer. The film was launched in a grand ceremony in the presence of Rajamouli, Vinayak, Bellamkonda and producer Jayantilal. The guests also included filmmaker Sukumar. Chatrapathi Remake: Bellamkonda Sai Sreenivas to Make His Bollywood Debut with Adaptation of SS Rajamouli’s Telugu Hit Starring Prabhas.

According to the film's production team, Rajamouli sounded clapboard for the muhurtham shot, while star Rama Rajamouli switched on the camera and producer AM Ratnam did the honorary direction. The script has been handed over to the makers by Vijayendra Prasad. "We are tremendously excited and thrilled as this is one of our grand projects along with talented actor Bellamkonda Sai Sreenivas and renowned Director VV Vinayak. We are confident that this collaboration will be loved by the audience and will make history in the Indian cinema," Jayantilal Gada, Director at Pen Studios said. Roar Of RRR: Seeing SS Rajamouli In Action Makes Our Wait for Jr NTR, Ram Charan’s Movie Highly Exciting; Making Video Confirms October Release Date!

This film will mark debut of Vinayak in Hindi cinema and a huge set has been erected in Rangasthalam village set. A lengthy schedule commenced on Friday. Rajamouli's father KV Vijayendra Prasad who penned the story for the original is the writer for the remake version as well. Known as a writer of Hindi films such as "Bajrangi Bhaijaan" and "Manikarnika", he has made few changes to the script according to tastes and sensibilities of the Hindi audience.

Heartfelt thanks to @ssrajamouli garu for gracing the launch of #Chatrapathiremake, it’s really a pleasure Sir😊

Bellamkonda has been working out rigorously to attain a desired look for the film. Bollywood trainer Prashant Sawant has been hired as his personal trainer and he has appointed a Hindi tutor to learn the nuances of the language. Music composer Tanishk Bagchi will score music for this film and Anl Arusu will oversee action choreography. Sunil Babu who has earlier worked in films such as "Maharshi", "Ghajini", "Special 26" is the production designer. Mayur Puri provides dialogues for the film. Other actors who will be part of this project are Sahil Vaid, Amit Nair, Rajendra Gupta, Shivam Patil, Swapnil, amongst others.

(The above story first appeared on LatestLY on Jul 16, 2021 08:07 PM IST. For more news and updates on politics, world, sports, entertainment and lifestyle, log on to our website latestly.com).