Comali Movie Review: Jayam Ravi Does a Fine Job but a Dull Second Half Ruins his Efforts, Say Critics

Jayam Ravi's Comali is the regional release this week and it's a one time watch say some critics. While the actor does a fine job and carries the weight of an entire movie on his able shoulders, it's a weak second half that ruins his efforts. The movie starts on a great note with a promising first half but loses its grip after the interval. 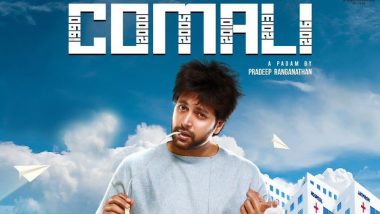 As Bollywood gears up to witness its major box office clash between Akshay Kumar's Mission Mangal and John Abraham's Batla House, South has a major offering in Jayam Ravi's Comali. It revolves around a patient who wakes up from coma after 14 long years and is a comical take on how the world has changed in all these years. Recently the movie was embroiled in a controversy after Rajinikanth's fan opposed a certain scene from the movie. Nonetheless, the movie has finally hit the screens and critics are busy penning some words for the same.

Let's take a look at what the critics have to say about the film...

Firstpost (3/5): "Comali is packaged as a jolly-feel-good entertainer, laced with emotions and nostalgia. The crackling onscreen bonding between Ravi and Yogi makes it enjoyable to a large extent," writes Sreedhar Pillai.

Galatta.com (2/5): "Jayam Ravi is very natural in the character of Ravi and he looks lively on screen after a very long time. Comali is an emotional fun ride that has the potential to connect with the masses if you could spare the dull moments in the second half," writes their panel.
Times of India (2.5/5): "The performances of Jayam Ravi and Vinodhini, coupled with Hip Hop Adhi's music make the emotional scene towards the climax works to a good extent. There are scenes which 90s kids can relate to, staying almost true to how the makers had claimed, and some episodes which involve Ravi’s innocence and ignorance are depicted well," writes Thinkal Menon.
Behindwoods.com: (3/5): "Jayam Ravi's acting in the important pre-climax might remind you the Santhosh Subramanian scene with Prakash Raj, but the actor had delivered the emotional scenes really well that makes you ignore the minor logical loopholes and enjoy the ride," writes their critic.
Seems like Jayam Ravi's new release suffers from the second half syndrome. While the movie starts on a great note with some comical touch to it, it loses its grips post the interval. Nonetheless, let's hope for the audiences to embrace it and make it a success.

(The above story first appeared on LatestLY on Aug 15, 2019 03:16 PM IST. For more news and updates on politics, world, sports, entertainment and lifestyle, log on to our website latestly.com).