F3: Makers of Venkatesh Daggubati, Varun Tej’s Family Entertainer to Have a Low Ticket Price of Their Film

Tollywood producer Dil Raju, who spoke to the press about his upcoming family entertainer F3, expressed his concern with rising ticket prices. 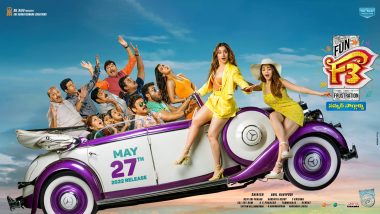 Tollywood producer Dil Raju, who spoke to the press about his upcoming family entertainer F3, expressed his concern with rising ticket prices. He explained why the producers of 'F3' and he decided against raising movie ticket prices in Telugu states. "As a person who has seen what the Telugu film industry has undergone during the pandemic, I understand the hike of the ticket prices is only to cover a few losses", Dil Raju explains. F3 Song Life Ante Itta Vundaala: Venkatesh Daggubati, Varun Tej’s Track Is Vibrant and Peppy; Pooja Hegde’s Dance Moves Are Unmissable! (Watch Lyrical Video).

The producer also revealed that the 'Fun and Frustration' franchise will continue with 'F4,' directed by Anil Ravipudi once more. "It is too early to talk about 'F4', but we sure have plans to take this franchise ahead", Dil Raju stated. Venkatesh Daggubati, Varun Tej, Tamannah, Mehreen, Sonal Chauhan, and others star in the film 'F3'. The entertaining film will be released on May 27.

(The above story first appeared on LatestLY on May 19, 2022 09:25 PM IST. For more news and updates on politics, world, sports, entertainment and lifestyle, log on to our website latestly.com).