Kaadan released today and the reviews are now out. Critics have heaped praises on Rana Daggubati's transformation and also his performance which is top-notch. But they aren't as kicked about the movie as a whole. Many believe it could have been a much better film. 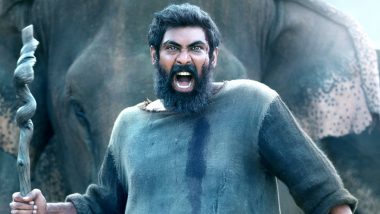 Kaadan or Aranya released today and the reviews are out. The Hindi version, Haathi Mere Saathi, has been postponed owing to the rising COVID-19 cases on this side.  Rana Daggubati's forester turn has made every critic really impressed by his acting chops. But they aren't happy with what Prabhu Solomon has packed in this thriller around elephants. Entertainment News | Release of ‘Haathi Mere Saathi’ Hindi Version Pushed, Telugu and Tamil Versions to Debut as Planned

Kaadan tells the story of a Narendra Bhupathi who has grown up in the lap of nature. For him, the beings of the forest are his family and he would do anything to protect them. So when a few men of money decide to erase the land to build a township, there are ripple effects that turn bloody and sentimental.

Check out what the critics have to say about it.

The Hindu: Rana singularly tries to hold things together, trying to save the elephants as well as the film. He is all heart when he tries to win back the trust of the elephants. Shriya and Zoya are good, but there’s not much they can do with their under-developed characters. There’s a dialogue where Rana says that animals know where to look for food and water according to the season, human beings don’t. The giants are superior creatures, and their cause deserved a better film.

Sify: In this Prabhu Solomon's film, the message conveyed is not organic and sounds preachy in many places. Also, the editing is disjointed and it looks like, the director and editor have chopped off many scenes on the editing table. What happened to Vishnu Vishal's character? The director hasn't given proper justice to his role and is there any internal politics? You can't shoot a film somewhere in North India and tell us that the forest is in the Coimbatore district just because there is a godman who looks alike Jaggi! To conclude, Kaadan is yet another message propaganda film. Watch it for the earnest performances of Rana and Vishnu!

Times Of India:  It is only in the climax that the filmmaker starts to sermonise, which feels unnecessary given that we get the movie's 'message' even without the need for any underscoring. But the earnestness in the storytelling keeps the film afloat, making us root for its characters. And then there is Rana, who wins us over with the sheer physicality of his performance. It is as magnificent as the animals and the jungle.

Galatta: Director Prabu Solomon’s efforts and intention to deliver a socially relevant film are noteworthy and appreciable. The message about the importance of forests and elephants is definitely a good takeaway and the makers can be appreciated for the same. Had the emotions worked well with better treatment, Kaadan would’ve been a much more impactful film

(The above story first appeared on LatestLY on Mar 26, 2021 01:31 PM IST. For more news and updates on politics, world, sports, entertainment and lifestyle, log on to our website latestly.com).