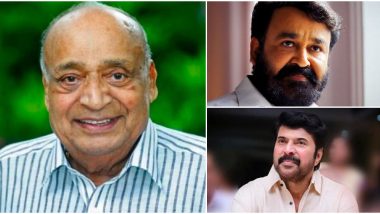 MP Veerendra Kumar, Rajya Sabha member and Managing Director of Mathrubhumi Group, died on Thursday due to cardiac arrest. The media baron was aged 84 and passed away at a private hospital in Kerala, Kozhikode. Kumar was sworn in as a member of the Rajya Sabha last month after being elected as an independent in a bypoll from Kerala. Deeply saddened by his passing, actors from the South industry took to social media to share heartfelt condolences. Several actors from the Malayalam film industry including actors such as Mammootty, Nivin Pauly, Prithviraj Sukumaran among others expressed grief over the loss of Kumar. MP Veerendra Kumar, Rajya Sabha Member And MD of Mathrubhumi Group, Dies Due to Cardiac Arrest in Kozhikode.

Mammootty took to Facebook to share an emotional note on the passing of Kumar as he wrote about their close relationship. He wrote, "We have been a very close relationship since the first time we met. On every stage, in each stage, we were like friends at every stage." The actor even mentioned that Veerendra Kumar considered him to be like a cousin to him. Lauding Kumar's contributions to politics and literature, Mammootty said, "He was always affectionate towards me. We shared a very strong bond." Several other South stars also took to social media to express their condolences. Mammootty Starrer ‘One’ Will Not Release On OTT Platforms, Makers Confirm This Malayalam Film Will Hit The Theatres.

Prime Minister Narendra Modi also took to Twitter to share his condolences on the passing of the Rajya Sabha MP. He wrote, "Anguished by the passing away of Rajya Sabha MP Shri M.P. Veerendra Kumar Ji. He distinguished himself as an effective legislator and Parliamentarian. He believed in giving voice to the poor and underprivileged. Condolences to his family and well wishers."

(The above story first appeared on LatestLY on May 29, 2020 12:21 PM IST. For more news and updates on politics, world, sports, entertainment and lifestyle, log on to our website latestly.com).