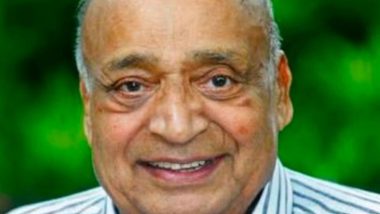 Kozhikode, May 28: MP Veerendra Kumar, Rajya Sabha member and Managing Director of Mathrubhumi Group, died on Thursday. He was 84. According to news agency ANI, Veerendra Kumar, a media baron, died at a private hospital in Kerala Kozhikode after a cardiac arrest. Kumar, a former Janata Dal (United) Kerala unit president, was born on July 22, 1936, in Wayanad.

Kumar was sworn in as a member of the Rajya Sabha last month after being elected as an independent in a bypoll from Kerala. He was earlier elected to the upper house from Kerala as a JD(U) MP in April 2016, but he later resigned in December 2017, following disagreements with party chief and Bihar Chief Minister Nitish Kumar over the latter’s joining hands with the BJP-led NDA.

Condolence on the sad demise of

Kumar was previously associated with HD Deve Gowda's Janata Dal (S), Socialist Janata (Democratic), Loktantrik Janata Dal. He was elected to Lok Sabha in 1996 and 2004 from the Kozhikode constituency. During his first tenure, he served as the Minister of State for Finance and later as Labour Minister with independent charge.

(The above story first appeared on LatestLY on May 29, 2020 12:03 AM IST. For more news and updates on politics, world, sports, entertainment and lifestyle, log on to our website latestly.com).