South actress Oviya Helen has found herself in hot waters. As her tweet dated February 13, 2021, created quite a chaos on the micro-blogging site wherein she had posted #GoBackModi. This action of the actress irked Bharatiya Janata Party’s Tamil Nadu unit and they lodged a police complaint against her. Check out the full story. 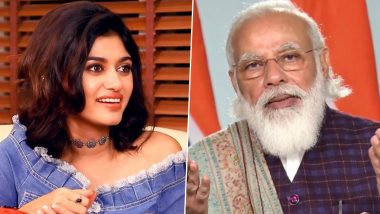 It was on Sunday (Feb 12) when PM had made his presence felt in Chennai with an aim to launch a few developmental projects. During the same, Oviya had tweeted the above-mentioned hashtag. Well, not just a police complaint, as reportedly, D Alexis Sudhakar, the state secretary of TN BJP also has submitted a petition to the Superintendent of police asking to investigate into the matter and take action against her under section 69 A of IT Act r/w 124 A, 153 A, 294 of the IPC (Indian Penal Code). Preetika Chauhan Arrested by NCB; TV Actress Was Buying Drugs.

"Sri Lanka and China are in connivance with persons like Oviya and are trying to create law and order issues against our country’s sovereignty targeting our Prime Minister Narendra Modi,” D Alexis stated. Helen's tweet is still receiving mixed response online.

For the one's who aren't aware, Oviya is quite a popular face from the showbiz and has given hits namely Kalavani, Kanchana 3 and more. She's popularly known for her stint in the first season of Kamal Haasan hosted Bigg Boss. Stay tuned!

(The above story first appeared on LatestLY on Feb 15, 2021 05:12 PM IST. For more news and updates on politics, world, sports, entertainment and lifestyle, log on to our website latestly.com).