Prakash Raj Birthday: From Iruvar To Dhaya, 5 Movies That Won Him The National Award

Prakash Raj is one of the finest actors in the industry. The actor who has turned a year older today is popularly known to portray as the antagonist on the big screen. 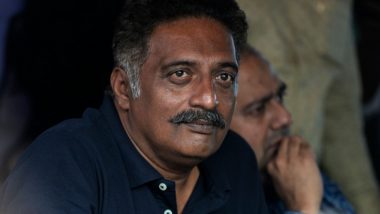 Prakash Raj is one of the finest actors in the industry. The actor who has turned a year older today is popularly known to portray as the antagonist on the big screen. His works have won him numerous prestigious accolades over the years. After doing numerous stage and television shows, the veteran actor ventured into cinema. He initially played supporting roles in Kannada films and his breakthrough role came with KSL Swamy’s Harakeya Kur. Prakash Raj’s performance came into notice and with time he entered Tamil, Malayalam, Telugu and Hindi film industries and left the audience impressed with his works. Jai Bhim: Prakash Raj's Slap-Scene Controversy Explained; Why Suriya's Tamil Film Has Annoyed the Hindi-Speaking Audience on Twitter.

Apart from acting, Prakash Raj has also directed and produced a films too for which he even won awards. He made his directorial debut in Sandalwood with the movie Naanu Nanna Kanasu. Some of the other films helmed by him includes Dhoni, Manavoori Ramayanam (Telugu), among others. Prakash Raj is a recipient of five National Awards. He won Best Supporting Actor for the Tamil movie Iruvar, Special Mention for the Telugu film Anthapuram, Special Jury Award for Tamil film Dhaya, Best Actor for the Tamil movie Kanchivaram and Best Feature Film in Kannada (as producer) for the film Puttakkana Highway.

These are the films for which Prakash Raj won National Awards. We wish the gem of Indian Cinema a very happy birthday, many more amazing films and roles. Have a great birthday, Prakash Raj!

(The above story first appeared on LatestLY on Mar 26, 2022 08:20 AM IST. For more news and updates on politics, world, sports, entertainment and lifestyle, log on to our website latestly.com).