Prakash Raj in Jai Bhim plays an upright IG in the police named Perumalsamy. While the investigating the central case in the movie, he is seen interrogating a North Indian pawn-shop owner, who speaks to him in Hindi. Perumalsamy immediately slaps the seth, who suddenly switches to Tamil and asks why he slapped him. 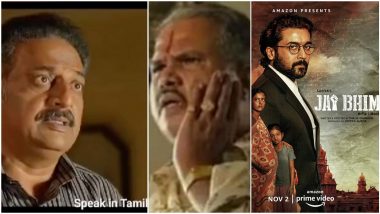 Jai Bhim: Prakash Raj Slaps A Character Who Speaks in Hindi and It Has Created Outrage on Twitter! (Photo Credit: Twitter)

Jai Bhim, the new film on Amazon Prime Video, is bringing in good reviews from the critics and the viewers. The film, written and directed by TJ Gnanavel, has been praised for its hard-hitting narrative, its strong performances especially from Suriya and Lijomol Jose, and its powerful courtroom sequences. However, there is one scene that is bothering the North Indian audience of the film, that involves Prakash Raj and a slap! Jai Bhim Movie Review: Suriya Puts His Best Foot Forward in This Powerful and Increasingly Relevant Legal Drama.

Prakash Raj in Jai Bhim plays an upright IG in the police named Perumalsamy. While the investigating the central case in the movie, he is seen interrogating a North Indian pawn-shop owner, who speaks to him in Hindi. Perumalsamy immediately slaps the seth, who suddenly switches to Tamil and asks why he slapped him. Perumalsamy asks him whether he can speak in Tamil, to which the pawn-shop owner sheepishly replies in affirmative and then continues the conversation in Tamil.

This scene has not gone down well with the Hindi-speaking audience. and it has created a 'language debate' on social media. Some of the right-wingers, who are not a fan of Prakash Raj for his affront opposition to BJP and its policies, are slamming the actor, as if it was him who included the scene in the movie.

Check out some of the Reactions below:

I am really heartbroken after watching #JaiBhim, nothing against actor or anyone but felt really bad, there is a scene in the film where a person speaks Hindi and Prakash Raj slaps him and tells him to speak in Tamil

Honestly this kind of scene was not needed….Hope they cut it

Prakash Raj's character character slaps a man for speaking in Hindi in the Tamil and Telugu versions of a film. But in the Hindi version, the man gets slapped for not speaking "the truth".

Prakash Raj with his propaganda in the movie ‘Jay Bhim’ where he slaps a person who speaks in Hindi. pic.twitter.com/1SwPVssbK7

But there are also others who came in defence of the scene, saying the context has been misconstrued. Like these respected senior journalists explaining how the seth was trying to confuse the IG by speaking in Hindi and create a language barrier, so he was slapped into changing his stance.

Hi, the scene is not against Hindi-speaking Indians. The particular character tries to get away by speaking in Hindi (so that Prakash Raj wouldn't understand) and knowing this strategy, he slaps and asks him to speak in Tamil.Tamil filmmakers are not against the language Hindi1/2

He uses Hindi to obfuscate the truth about his involvement in a crime. He collaborates with Tamil criminals. This has nothing to do with being slapped for speaking in Hindi. https://t.co/vp5zPNAuGU

This Twitter user reminded the platform of a similar in Hansal Mehta's SonyLIV series Scam 1992, where the interrogator (Rajat Kapur) was from Delhi and demands the Tamil-speaking interrogatee to speak in Hindi; the user asks why this scene never bothered anyone. Let's also take this opportunity to remind fans of the years in which South Indians were caricatured in Hindi films from Mehmood's blackfacing in Gumnaam to Shah Rukh Khan's atrocious accent in Ra.One. Not to mention, North-Indianising real-life South heroes in Akshay Kumar films like Airlift and Pad Man.

#JaiBhim So hindians Advising that prakash raj slapping scene was unnecessary...Fine..so what abt this scene in scam 1992...Spewing Hate on Tamil using a Tamil character so that it doesn't look its against Tamil..How cheap...so keep this as a counter for that scene. #hindi #tamil pic.twitter.com/hAAHQJfj8H

Now a strong argument can be made for both the cases here. In defence of the Jai Bhim scene, we can say that the seth did try to befuddle the cop in speaking in Hindi, see the tone in which he speaks to Perumalsamy before the slap, and then how it becomes more deferential after the slap. Jai Bhim Review: 7 Reasons Why We Have Fallen in Love With Suriya's Film, Streaming on Amazon Prime Video.

However, for a film like Jai Bhim that tries to expose the police high-handedness during investigation process and using torture, this scene will come across as an oddity. Considering how the Hindi dubbed scene of the film avoids the language barrier issue and makes the slap as a tool for making the man speak the Truth, and not in Hindi. This is a film where not even the errant officers who are corrupt to the core and causes custodial deaths that they cover up, get beaten up, so this scene is definitely randomly placed.

But it might have been less to do with Prakash Raj as an actor, and more of Tamil cinema's strong stance towards Hindi imposition of the North that it has slyly taken on in some of its movies. Even Suriya's recent productions can be responsible for that. In Soorari Pottru, the main antagonist, played by Paresh Rawal, is a North Indian fellow going by the name of Goswami. In Raame Aandalum Raavane Aandalum, backed by Suriya's 2D Entertainment, during the fair scene, the lead couple gets into an argument with a North Indian shopkeeper and accuses him of cheating them when he refuses to take their now defunct Rs 1000 note. Kind of a sneaky dig at demonetisation. Raame Aandalum Raavane Aandalum Movie Review: An Endearing Satire Laced With Humour and Emotional Moments.

Even the recent Udanpirappe, the family drama with Jyothika in the lead and was produced by their banner, has a scene where Jyothika's character keeps her gold mangalsutra as mortgage at a pawn-shop owner to take care of a patient's hospital bills and Soori's character demands why the man, who is clearly an outsider, took the jewellery despite knowing who it belongs to.

So was the Jai Bhim scene a deliberate poke as the incessant Hindi imposition from the centre, or merely a massy scene to tackle a non-cooperative witness? Let us know your take in comments section below.

(The above story first appeared on LatestLY on Nov 03, 2021 12:30 PM IST. For more news and updates on politics, world, sports, entertainment and lifestyle, log on to our website latestly.com).