Prakash Raj Birthday: From Kanchivaram to Okkadu – 5 Times When This Versatile South Actor Stunned Us with His Performances

Prakash Raj is one of the most versatile actors of Indian Cinema. He is predominantly known for his works in south, but this 55-year-old has also acted in Hindi films. 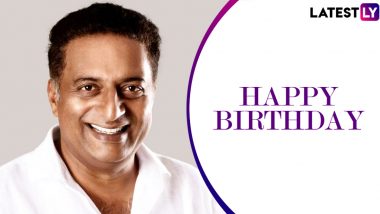 Prakash Raj is one of the most versatile actors of Indian Cinema. He is predominantly known for his works in south, but this 55-year-old has also acted in Hindi films. Before entering films, Prakash Raj did numerous stage shows. Besides Kannada, Prakash is fluent in other Indian languages as well – Tamil, Telugu, Malayalam, Hindi and Marathi. He is widely known to portray negative roles in films, and he is just brilliant at it. The way he pulls off the role of a villain, it will give you goosebumps. Nassar Birthday: Nayakan, Baahubali – 5 Noteworthy Performances of South Indian Film Industry’s Most-Loved Actor!

Prakash Raj, a National Award-winning actor, has left us all impressed over the years. He has fans across the country and one just cannot stop praising his works. On this special day, let’s take a look at some of his iconic performances in his acting career.

Kanchivaram – Prakash Raj won the National Film Award for Best Actor for his role in the Priyadarshan directorial. The film revolved around the famous town Kanchipuram, which is best known for silk sarees, and Prakash Raj played the character Venkatam, who is a silk weaver. His performance in this movie is considered to be the best till date in Kollywood.

Iruvar – A Mani Ratnam directorial, Prakash Raj plays the character Tamizhselvan, who plays the role of a poet and an activist. The film might have tanked at the box office, but his brilliant performance helped him earn a National Film Award for Best Supporting Actor.

Singham – Like we said earlier, besides acting in south films, Prakash Raj has also worked in Hindi movies. In Singham, he played the role of a don and politician named Jaikant Shikre, who is corrupt and runs various rackets.

Wanted – Don’t you remember the international don Gangi Bhai from Wanted? Prakash Raj’s villainous yet eccentric avatar was definitely the highlight in this commercially successful film that starred Salman Khan in the lead role.

Prakash Raj was recently seen in Sarileru Neekevvaru, in which he played the role of a corrupt minister. It is heard that he has also bagged in role in Pawan Kalyan’s Vakeel Saab and Rajinikanth’s Annaatthe. We just cannot wait to watch this brilliant actor on the big screens. Here’s wishing an amazing year ahead, filled many more amazing roles. Happy Birthday, Prakash Raj!

(The above story first appeared on LatestLY on Mar 26, 2020 08:00 AM IST. For more news and updates on politics, world, sports, entertainment and lifestyle, log on to our website latestly.com).