Puneeth Rajkumar Birth Anniversary: Did You Know The Power Star Was Just An Infant When He Was Featured In The Thriller Film Premada Kanike?

Puneeth Rajkumar was one of the most loved actors of Kannada Cinema. He was the fifth and youngest child of matinee idol Dr Rajkumar and Parvathamma Rajkumar. 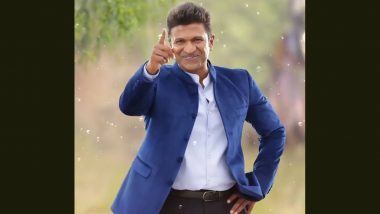 Puneeth Rajkumar was one of the most loved actors of Kannada Cinema. He was dubbed by media and fans as Power Star. He was the fifth and youngest child of matinee idol Dr Rajkumar and Parvathamma Rajkumar. Born on March 17, 1975, Puneeth won audiences hearts when he was just six months old and it all started from Premada Kanike. Yes, his career started when he was just an infant and then as a child artiste he acted in more than 25 films. James: Here’s What Prabhas Has To Say About Power Star Puneeth Rajkumar’s Last Film.

The thriller film Premada Kanike, directed by V Somashekhar, marked Puneeth Rajkumar’s debut in the world of cinema. The film released in 1976 starred his father Rajkumar, Aarathi and Jayamala in the lead. He was then credited as Master Lohith in the film. This film had had received positive reviews and it had earned a cult status for all the crime-thriller genre films.

It was in April 2002 when Puneeth Rajkumar had made his debut as a lead actor with the film Appu in which he was seen as a carefree but an honest lad. He then went to star in many blockbuster films. Puneeth’s demise left his colleagues and fans heartbroken. On the Power Star’s birth anniversary, his last film titled James, will be released in theatres. The action thriller is written and directed by Chethan Kumar. Puneeth Rajkumar’s works will always be cherished by the audience.

(The above story first appeared on LatestLY on Mar 17, 2022 08:15 AM IST. For more news and updates on politics, world, sports, entertainment and lifestyle, log on to our website latestly.com).