Mammootty’s Malayalam film Puzhu premiered on SonyLIV today. As per reports, hours after its release on the streaming giant, the film has been leaked online. 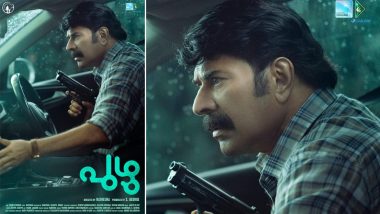 Mammooty’s Malayalam film Puzhu premiered on SonyLIV today, May 13. Directed by Ratheena PT, the film has been hailed as an impressive thriller by the audience. From the screenplay, direction, Mammukka’s intense performance, background score, everything has been showered with heaps of praises. Sadly, Puzhu has been leaked online. As per reports, hours after its release on the OTT platform, Puzhu has become victim of online piracy. It is reported that Mammootty’s movie has been made available on torrent sites and telegram channels for free download and could also be watched online in HD quality. Puzhu Movie Review: Mammootty’s Fantabulous Negative Performance Anchors This Slow-Paced Psychological Drama.

Apart from Puzhu, there are several other movies and series that have too become the victims of online piracy. It includes Jayeshbhai Jordaar, Sarkaru Vaari Paata, Doctor Strange in the Multiverse of Madness among others that have also been leaked online and made available in HD prints.

(The above story first appeared on LatestLY on May 13, 2022 01:28 PM IST. For more news and updates on politics, world, sports, entertainment and lifestyle, log on to our website latestly.com).