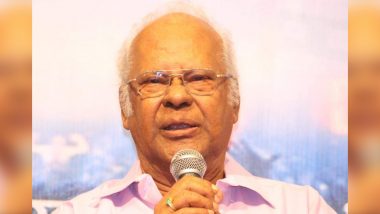 Veteran Telugu actor Raavi Kondala Rao breathed his last on July 28, 2020, in Hyderabad. The 88-year-old died of cardiac arrest. According to a report in TOI, he was suffering from heart-related ailments. Raavi was not only a great actor of the Tollywood industry, but also a writer, theatre artist, producer and director. He has appeared in more than 500 films and his contributions to the world of Telugu Cinema will always be cherished. Veteran Actress Kumkum Passes Away.

Raavi Kondala Rao, born in Samarlakota, Andhra Pradesh, was one of the finest actors. In a career spanning six decades, he has delivered many memorable roles. He had made his acting debut in 1958 with the film Sobha. Tene Manasulu, Pelli Pusthakam, Dasara Bullodu, Radha Gopalam, are some of his other notable works. His wife, Radha Kumari, who passed away in 2012, was also a renowned actress. The duo had worked together in several films. Rajat Mukherjee Passes Away: Anubhav Sinha, Ashoke Pandit, Manoj Bajpayee Mourn The Director’s Demise.

Chiranjeevi, who had also worked with Rao told TOI, “I had the good fortune of working with him right from the beginning of my career. A multifaceted genius, Raavi Kondala Rao leaves behind a void in Telugu Cinema.” Former CM of Andhra Pradesh N Chandrababu Naidu and actor-politician Pawan Kalyan had offered condolences on the demise Raavi Kondala Rao.

(The above story first appeared on LatestLY on Jul 30, 2020 11:23 AM IST. For more news and updates on politics, world, sports, entertainment and lifestyle, log on to our website latestly.com).