Ram Charan Birthday: From Chirutha To Rangasthalam, 5 Best Telugu Movies Of The Actor That Are Audiences Favourite!

It was in 2007 when Ram Charan had made his film debut and it had turned out to be a hit. On the occasion of his birthday, let’s take a look at some of his best movies that are audiences favourite. 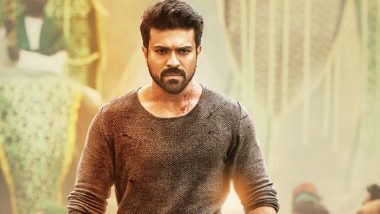 Ram Charan is one of the finest actors of Tollywood, who has left everyone impressed with his roles on the big screen. Son of Chiranjeevi and Surekha Konidela, the Mega family lad has turned a year older today. Also, it would be double celebration for him as his film RRR, which released on March 25, has smashed box office records on the opening day itself. The magnum opus has turned out to be a perfect birthday treat for Ram Charan and all his fans as well. RRR Box Office Collection Day 1: Jr NTR – Ram Charan’s Magnum Opus Mints Rs 223 Crore Worldwide!

It was in 2007 when Ram Charan had made his film debut and it had turned out to be a hit. His acting prowess won audiences hearts. Over the years he has done a varied range of roles and entertained movie buffs. On the occasion of Ram Charan’s birthday, let’s take a look at some of his best movies that are audiences favourite.

Ram Charan played the role of an ex-convict in this film helmed by Puri Jagannadh. He plays the role of a youngster who is seeking to kill his father’s murderer.

Ram Charan played dual roles in this SS Rajamouli directorial and also managed to establish himself as one of the leading contemporary actors of Telugu Cinema.

Although this movie wasn’t a box office hit, Ram Charan’s role as an NRI was lauded by the audience. Also many found the storyline gripping and over time Orange became a cult film.

The action thriller featured Ram Charan as an IPS Officer. This film was a remake of the Tamil movie Thani Oruvan.

Ram Charan’s performance as Chitti Babu, who is partially deaf, was praised by the audience. Many critics even labelled his role in this Sukumar film as ‘career best’.

These are some of the films of Ram Charan that will always remain as audiences’ favourite. Here’s wishing the dynamic actor of Tollywood a very happy birthday and a wonderful year ahead.

(The above story first appeared on LatestLY on Mar 27, 2022 12:01 AM IST. For more news and updates on politics, world, sports, entertainment and lifestyle, log on to our website latestly.com).