Ramya Krishnan is one of the most loved actresses down south. She was born into a Tamil-speaking family on September 15, 1970. She has turned 49 and fans across the country has been showering her with wishes and love across social media platforms. 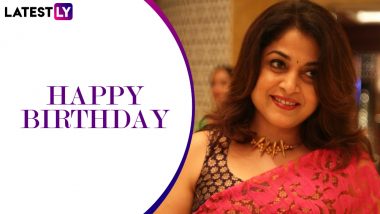 Ramya Krishnan is one of the most loved actresses down south. She was born into a Tamil-speaking family on September 15, 1970. She has turned 49 and fans across the country has been showering her with wishes and love across social media platforms. The niece of Tamil comedian Cho Ramaswamy is not just an excellent actress, but she is also a trained dancer. She has received training in dance forms such as Bharathanatyam, Western and Kuchipudi. Bigg Boss Telugu 3: Akkineni Nagarjuna Goes on a Mini Break and Ramya Krishnan Takes His Place as the Show’s Host, Fans Are Impressed!

Ramya Krishnan started acting when she was very young. Ramya has acted in Telugu, Tamil, Kannada, Malayalam and Hindi films. She was just 14 when she made her acting debut in Vellai Manasu directed by Chitralaya Gopu. But she shot to fame for her role in Sutradharulu that released in 1989. In the 90s Ramya Krishnan emerged as one of the leading actresses of Tollywood. Ramya has worked with the leading actors of south which includes Rajinikanth, Chiranjeevi, Venkatesh, Mohan Babu, and others. On her special day, let’s take a look at her best five roles in her acting career.

Ramya Krishnan’s role as Neelambari is unforgettable. Since then she is considered as the one of the best woman villain. From her style to dialogue delivery, Ramya’s terrific performance was lauded by the audience. In a film that had superstars such as Sivaji Ganesan and Rajinikanth, the gorgeous Ramya Krishnan matched every step of the lead actors.

In Panchatanthiram we saw Ramya Krishnan played the role of a call girl name Maragathavalli also known as Maggie. Her stylish avatar in the 2002 released film had become a talk amongst movie buffs. From her perfect comic timing to slaying it in style, we once again saw Ramya pulling off a negative role brilliantly.

Ramya Krishnan essayed the character Rajyalakshmi in Konchem Ishtam Konchem Kashtam. She played the role of a doting mother in this Telugu flick. She even won the Filmfare Award for Best Supporting Actress.

We saw Ramya playing a fierce role in the magnum opus Baahubali: The Beginning, Sivagami Devi - former regent of the Mahishmati Kingdom. Her fearless avatar left the critics and audience mighty impressed. With this role, she shot to fame globally.

In Soggade Chinni Nayana Ramya Krishnan played the character Satyabhama, a caring and cool mother and mother-in-law. It focuses on how as a single mother she tries to save her son’s marriage with the help of her husband’s spirit.

Besides delivering some amazing performances on the big screens, Ramya Krishnan has also acted in small screen industry. She has been a judge on the dance show Jodi Number One, Kalasam, Bigg Boss Telugu 3, and many others. Ramya has always won hearts with her excellent performance. We wish her all the love and luck on this special day. Happy Birthday, Ramya Krishnan!

(The above story first appeared on LatestLY on Sep 15, 2019 08:00 AM IST. For more news and updates on politics, world, sports, entertainment and lifestyle, log on to our website latestly.com).