Bigg Boss Telugu 3: Akkineni Nagarjuna Goes on a Mini Break and Ramya Krishnan Takes His Place as the Show’s Host, Fans Are Impressed!

Akkineni Nagarjun, the host of Bigg Boss Telugu 3, took a mini break from his hectic schedules. He was off to Spain with his family to celebrate his 60th birthday. Since he was away, the actor’s place was filled in by Ramya Krishnan aka Sivagami. 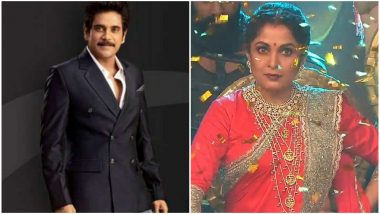 Akkineni Nagarjun, the host of Bigg Boss Telugu 3, took a mini break from his hectic schedules. He was off to Spain with his family to celebrate his 60th birthday. Since he was away, the actor’s place was filled in by Ramya Krishnan aka Sivagami. The actress who is known for her role in the Baahubali franchise left the contestants and the audiences enthralled as the host of the controversial reality show.

Before the Saturday (August 31) episode went on air, the makers of the show released a teaser of it. In it Ramya Krishnan can be seen in the avatar of Sivagami. Since then fans were eagerly waiting to watch the show. But right after the episode ended, netizens were all praises for her. In fact, some of them even suggested her to continue as the show’s host. Well, this isn’t the first time she has hosted a show. Earlier Ramya Krishnan has hosted shows such as Thanga Vettai on Sun TV and Bangaram Mee Kosam on Gemini TV.

The Queen #Sivagami @meramyakrishnan has arrived to #BiggBossTelugu3 as special host 👑👁️

And Here’s The Glimpse Of Tonight’s Episode:

See What Fans Have To Say:

1. One of the best episode of this season.

5. Last but not least not at all boring.

She is the power lady and she handled it very nice

I really loved this Saturday episode

Queen being the hilarious and prettiest Queen that she is!😍🤧🤣#RamyaKrishnan pic.twitter.com/I9cPqanXHr

Talking about a fresh host for the show a source revealed to India Glitz, “The directors of the show felt that a dose of freshness should be injected to lift the spirits of the viewers further.  The show has been doing great in terms of TRPs.  We have seen wild-card entries and guests.  But a new host is novel.” Well, before closing the Saturday night’s episode, Ramya Krishnan has left the housemates confused in terms of elimination. There are reports doing rounds stating there would be no elimination this week, but for the confirmation, we’ll have to wait for tonight’s episode.

(The above story first appeared on LatestLY on Sep 01, 2019 02:04 PM IST. For more news and updates on politics, world, sports, entertainment and lifestyle, log on to our website latestly.com).