Samantha Akkineni Birthday: Ye Maaya Chesave, Mahanati, Super Deluxe – 5 Best Films of the Actress and Where To Watch Them Online!

Samantha Akkineni has time and again proved that she's here to stay and that’s what sets her apart from the rest. And well, on the occasion of her 34th birthday today (April 28), we list down some of her best films and where to watch them online amid the pandemic. Read on. 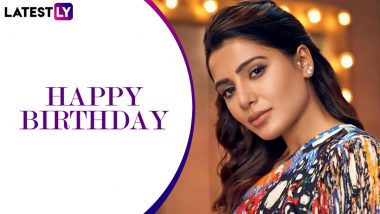 Samantha Akkineni is a force to reckon with. Right from being a fashionista to even making her presence felt in a male-dominated industry, she’s an inspiration to many out there. She’s one of the most versatile stars we have in the South showbiz who is surely here to stay and slay. She made her debut in 2010 with Ye Maaya Chesave, and in quite a short span managed to make a mark in the filmy duniya. The actress has time and again proved her mettle and that’s what sets her apart from the rest. And well, on the occasion of her 34th birthday today (April 28), we list down some of her best films and where to watch them online amid the pandemic. Samantha Akkineni and R Madhavan’s Pairing in This Commercial Will Make You Want Them Feature in a Film Soon (Watch Video).

It was with this Telugu film that Samantha made her debut in South cinema. Helmed by Gautham Menon, the romantic flick saw her starring opposite her now-husband Naga Chaitanya, and voila it turned out to be lucky for her, as the movie was a blockbuster.

The actress added one more feather to her hat by acting in SS Rajamouli’s Eega. Samantha acted alongside a housefly (computer-generated) and proved that she can also play difficult roles on screen. The film also took home two National film awards.

With an IMDb rating of 8.4, Rangasthalam saw the actress at her best. Helmed by Sukumar, the movie saw Ram Charan opposite Samantha, wherein the latter essayed the role of a village girl and nailed the act. The Family Man Season 2: Samantha Akkineni Says She Has Broken a Lot of Rules for Manoj Bajpayee’s Amazon Prime Show.

Shedding the quintessential heroine tag, Samantha made fans go gaga in Mahanati with her gripping performance. She played the role of a journalist and even though, with less screen presence, she created an impact. Kudos!

There are times in a film when a character you actually want to dislike earns your sympathy. That’s exactly what Samantha as Vaembu in Thiagarajan Kumararaja's Super Deluxe is all about. She does adultery in the movie yet you’ll not hate her, thanks to the climax.

Where to Watch: Netflix

That’s it, guys! While there are many films in which Samantha acted and was super as upar. However, the ones mentioned above are hand-picked and audience favourite. In case, you haven’t watched these movies, go and watch them now. Happy Birthday, Samantha Akkineni. Stay tuned!

(The above story first appeared on LatestLY on Apr 28, 2021 08:51 AM IST. For more news and updates on politics, world, sports, entertainment and lifestyle, log on to our website latestly.com).