Sarkaru Vaari Paata is directed by Parasuraman. The movie stars Mahesh Babu and Keerthy Suresh in the lead, and is releasing in theatres on May 12. 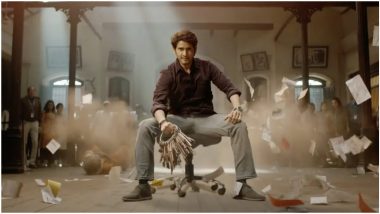 Mahesh Babu returns to storm the box office with his latest offering, Sarkaru Vaari Paata. Or at least, we are sure that he would do so in the opening weekend in Andhra Pradesh and Telangana. Mahesh Babu is a hugely popular star in his industry, his recent movies have done good business as per local trade experts, and he is also in the buzz for reportedly saying that Bollywood can't afford him. Mahesh Babu’s ‘Bollywood Cannot Afford Me’ Statement at Adivi Sesh’s Major Trailer Launch Event Sparks Debate.

Going by the trailer, there is no doubt that Sarkaru Vaari Paata is a commercial entertainer tailored to appeal to Mahesh Babu's hardcore fans. The presence of the National Award-winning actress Keerthy Suresh is an added advantage, and the song "Kalaavathi" featuring both of them is already a chartbuster. Director Parasuram is also coming after his commercially successful Geeta Govindam. The makers of Sarkaru Vaari Paata also recently tweeted that they would be releasing the film with English subtitles in regions beyond Andhra and Telangana.

The ingredients for a successful blockbuster are there, and there is already a chatter on social media about Sarkaru Vaari Paata repeating Allu Arjun's Pushpa box office success in the Hindi territories. However, let's see if there is some meat in that chatter.

While there is definitely a buzz around Sarkaru Vaari Paata, I don't see that buzz extending to viewers beyond the Telugu-speaking audience. Sarkaru Vaari Paata doesn't belong to a franchise like KGF Chapter 2 or has the SS Rajamouli stamp to grab the attention of  the North audience. Therefore, Sarkaru Vaari Paata should have made the first impression on them with its trailer. Unfortunately the trailer was received with mixed reactions, with the only attention-worthy scene was the unintentionally funny dialogue about 1000 Viagra and first night! Mahesh Babu’s ‘Bridegroom Taking 100 Viagra Pills’ Dialogue in Sarkaru Vaari Paata Trailer Sparks Debate on Social Media.

Then there is the matter of how the producers of Sarkaru Vaari Paata are going for the Pan-India success route. It is a good step that they have added subtitles for the film, but that isn't enough. The main reason why films like Baahubali series, RRR, KGF 2 or even Saaho and 2.0 clicked with the Hindi audience was that they were also released in Hindi dubbed versions - with some incredible dubbing work, just look at what Shreyas Talpade did to Allu Arjun's voice in Pushpa. Alas, there is no such release for Sarkaru Vaari Paata, who is content with releasing the film in English subtitles. But this ain't The Great Indian Kitchen, that appeals to a certain segment of viewers who loves content-driven cinema. A film like Sarkaru Vaari Paata has to appeal to a wider segment of the audience, so releasing in multiple languages is a need. It's not that all Hindi dubbed South films worked - Pailwan, Marakkar, Beast, Valimai, Radheshyam have failed this experiment. But still that's a job half-done.

So it is very hard for Sarkaru Vaari Paata to crack into the Hindi territory without a Hindi dubbed version. This approach I really find curious post RRR's release. If you are claiming that South movies are winning over Bollywood, then why are more movies not being released in Hindi? Why did Ram Charan not release Acharya in Hindi (not even with English subtitles) when it was his next major release after RRR? Have you not heard of the saying 'While the sun is shining, bask in it'? Or is Mahesh Babu content with the business that his movies do in Andhra, Telangana and overseas? Sarkaru Vaari Paata will release in theatres on April 12.

(The above story first appeared on LatestLY on May 11, 2022 08:20 PM IST. For more news and updates on politics, world, sports, entertainment and lifestyle, log on to our website latestly.com).