Actress Samantha Akkineni, who recently made her Hindi debut with The Family Man 2, has wrapped up shooting for the Telugu mythological drama Shaakuntalam. 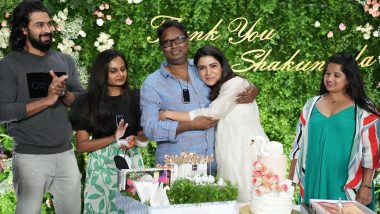 Actress Samantha Akkineni, who recently made her Hindi debut with The Family Man 2, has wrapped up shooting for the Telugu mythological drama Shaakuntalam. The actress wrote a long, emotional message on her social media accounts and thanked director Guna Sekhar for "making my dream a reality". Allu Arjun Shoots On The Same Set As His Daughter; Says ‘Pushpa Meets Bharata in Shaakuntalam’ (View Pic).

"And it's a wrap on 'Shaakuntalam'!! This film will stay with me for the rest of my life. As a little girl I believed in fairy tales ... not much has changed," Samantha tweeted, adding that Guna Sekhar was her "fairy godfather". In another tweet, she sounded ecstatic about her role: "When he narrated this film to me, I was immediately transported to a most beautiful world ... the world of Shaakuntalam ... a world like no other. But I was nervous and scared. Was it possible for us to create such beauty on celluloid??" Shaakuntalam: Samantha Akkineni Returns for the Second Schedule of Gunasekhar’s Film.

Bidding goodbye to the film, the actress ended her emotional tweet by thanking "this absolutely incredible human @gunasekhar1 sir, for he has created a world that has exceeded all my expectations. The inner child in me is dancing with joy." 'Shaakuntalam' also marks the movie debut of actor Allu Arjun's four-year-old daughter Allu Arha. It marks the entry of the Allu clan's fourth generation into the Telugu film industry.

(The above story first appeared on LatestLY on Aug 13, 2021 08:35 AM IST. For more news and updates on politics, world, sports, entertainment and lifestyle, log on to our website latestly.com).