Shyam Singha Roy is a time-travel story, with the '70s-era Bengal and contemporary Hyderabad backdrop. Nani plays the role of a social reformer, whereas Sai Pallavi is seen in the role of a devadasi. 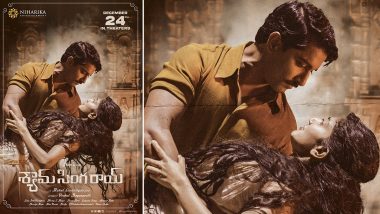 Nani and Sai Pallavi's hit movie Shyam Singha Roy will start streaming on OTT from January 21. Shyam Singha Roy, which was released in theatres on December 24, is still running and earning good numbers. The Nani-starrer is a time-travel story, with the '70s-era Bengal and contemporary Hyderabad backdrop. Nani has played the role of a social reformer, while Sai Pallavi allured the audience in the role of a devadasi. Shyam Singha Roy: Sai Pallavi Visits Theatre in Burqa To Witness Audience Reactions to Her Performance (Watch Video).

As the Sankranti season is to bring in new releases, the makers of Shyam Singha Roy have taken this decision to start streaming the movie on OTT. Nagarjuna and Naga Chaitanya's Bangarraju is slated for release on January 14, which would have an impact on Shyam Singha Roy. So, the OTT option is one better way to catch up with digital viewers.

(The above story first appeared on LatestLY on Jan 09, 2022 08:53 PM IST. For more news and updates on politics, world, sports, entertainment and lifestyle, log on to our website latestly.com).