SS Rajamouli, who has turned 48 today, is widely known for directing fantasy action films. His fans from across the globe are thanking him for entertaining them over the years with some of the brilliant films. 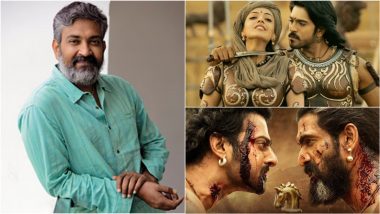 SS Rajamouli is considered as one of the most prolific filmmakers in the film industry. He is one of those directors with whom actors and actresses would never want to miss a chance to work. Rajamouli has delivered some great stories through his films and entertained movie buffs around the world. As the filmmaker turns a year older on October 10, there are several from across the globe who are thanking him on social media for giving some of the most brilliant films such Magadheera, Baahubali, among many others. RRR: SS Rajamouli’s Magnum Opus to Release Worldwide on January 7, 2022.

SS Rajamouli, who has turned 48 today, is widely known for directing fantasy action films. He has earned three National Film Awards and various other honours. In 2016, the ace filmmaker was honoured with the Padma Shri. On the occasion of his birthday, let’s a take a look at the five box office hits of Rajamouli.

Released in 2007, it was a socio-fantasy film that was lauded by critics. Starring Jr NTR, Mohan Babu, Priyamani and Mamta Mohandas in the lead, this Telugu film was blockbuster that had a 50-days run in 405 centers and completed a 100-day run in 210 centres. In fact, Yamadonga was one of the top films in Tollywood in that year.

Featuring Ram Charan and Kajal Aggarwal in the lead, this fantasy-action movie had become one of the biggest commercial successes in Tollywood. The film that was based on reincarnation-themed plot had won numerous awards including National Film Award for Best Choreography.

Written and directed by Rajamouli, the film was simultaneously shot in Telugu and Tamil languages with Sudeep, Nani and Samantha Ruth Prabhu in the lead roles. Trade analysts report suggested that Eega had minted Rs 170 million in South India on the day of its release. This blockbuster film has won two National Film Awards – Best Feature Film and Best Special Effects.

This part is the follow-up to Baahubali: The Beginning. The film had earned approximately Rs 8 billion worldwide within just six days of its release. This magnum opus also stands as the highest grossing film in the country.

Right now all eyes are on SS Rajamouli’s upcoming film, RRR, starring Ram Charan, Jr NTR, Alia Bhatt and Olivia Morris in the lead. It is touted to be one of the most expensive Indian films that is set to be released on January 7, 2022. Here’s wishing the ace filmmaker of Indian Cinema a very happy birthday and a prosperous year ahead!

(The above story first appeared on LatestLY on Oct 10, 2021 08:00 AM IST. For more news and updates on politics, world, sports, entertainment and lifestyle, log on to our website latestly.com).