Suresh Gopi Birthday: Thalastaanam, Manichitrathazhu, Commissioner – 5 Films Of The Malayalam Actor That Were A Massive Hit In The '90s!

Suresh Gopi is one of the popular actors of Malayalam Cinema who has done varied roles over the years. On the occasion of his birthday, let’s take a look at his films that were a massive hit in the ’90s. 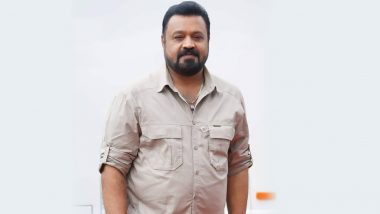 Suresh Gopi is one of the popular actors of Malayalam Cinema who has done varied roles over the years. The veteran actor, who celebrates his 64th birthday today, had made his acting debut as a child in 1965 with the film Odayil Ninnu. He has acted in more than 250 films and even won a National Film Award for Best Actor for his role in Kaliyattam. Suresh Gopi’s New Bearded Look Leaves Venkaiah Naidu Confused If It’s A Mask; Parliamentarians In Splits Over This (Watch Video).

Suresh Gopi was seen in supporting roles, he played negative roles and was noted for his villainous avatar in Irupatham Noottandu and so on. However, he got his breakthrough with Shaji Kailas’ Thalastaanam. On the occasion of the veteran Mollywood star’s birthday, let’s take a look at his films from the '90s that were a massive hit.

Written by Renji Panicker and directed by Shaji Kailas, this Suresh Gopi starrer explored about ‘concepts of campus politics and the impact of anti-social elements in students’. His role as Harikrishnan established him as a bankable lead actor.

Renji Panicker and Shaji Kailas joined hands once again for the crime thriller in which Suresh Gopi is seen an police official who gets hired by CBI to investigate a psychotic holy godman who runs a powerful narcotic drug mafia. The film not just broke office records but Suresh Gopi established himself as a lead actor in Malayalam Cinema.

The writer and director duo, Renji Panicker and Shaji Kailas, was a huge hit combo back in the 90s and Suresh Gopi turned into a star by featuring in their films. In this film, released in 1993, the actor’s character is seen as working for a reputed daily newspaper and at the same time attempting for IPS.

In 1993, Suresh Gopi starred in another commercially successful film that developed a cult following in the years after its release. The epic psychological horror directed by Fazil features Suresh Gopi as Nakulan alongside Mohanlal and Shobhana.

Writer Renji Panicker and director Shaji Kailas’ action thriller helped Suresh Gopi to gain a superstar status in Malayalam Cinema. He played the role of Bharath Chandran IPS in this movie that is regarded as a cult classic.

These are the films of Suresh Gopi that were a massive hit in the early ’90s. We wish the veteran Malayalam actor a very happy birthday and many more amazing projects in the future.

(The above story first appeared on LatestLY on Jun 26, 2022 08:27 AM IST. For more news and updates on politics, world, sports, entertainment and lifestyle, log on to our website latestly.com).