Dr P Saravanan who is the Managing Director of Saravana Multispeciality Hospital confirmed the news and took to Twitter to pay his condolences to the actor’s family. 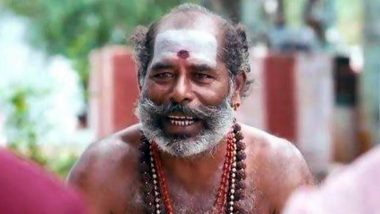 We all are very much aware of the fact that veteran South actor Thavasi had been battling with cancer for quite a long time. The actor finally succumbed to death and has passed away after fighting a brave battle with the disease. The actor breathed his last today in a hospital in Madurai. Thavasi, Tamil Actor, Is Suffering From Cancer; Video of the Artiste Seeking Help for Treatment Goes Viral as Fans Shocked With His Drastic Transformation.

Dr P Saravanan who is the Managing Director of Saravana Multispeciality Hospital confirmed the news and took to Twitter to pay his condolences to the actor’s family. Praying for his soul, the doctor shared the sad news with his fans.

Recently, a video of the actor requesting people to help him financially made rounds on the internet. The actor asked his co-stars and fans to help him with some funds so that he could get treated for cancer. In the video, he was seen saying, "I have been in this industry for 30 years, I never knew that this kind of disease would affect me.. this is a challenge that God has posed... Kindly help me avail treatment."

Thavasi had played a minor role in Sivakarthikeyan and Soori’s hit comedy film, Varuthapadatha Valibar Sangam (2013). Last year he had reportedly met with a road accident as well where he was injured really badly while returning from the shoot.

We offer our condolences to the family. May his soul rest in peace.

(The above story first appeared on LatestLY on Nov 23, 2020 10:20 PM IST. For more news and updates on politics, world, sports, entertainment and lifestyle, log on to our website latestly.com).