Vijay Sethupathi has also extended help to the ailing actor, Thavasi. Sethupathi has donated an amount of Rs 10 lakh to him, which was handed over by Soundara Raja, as per reports. Raja also added some amount from his side as well. 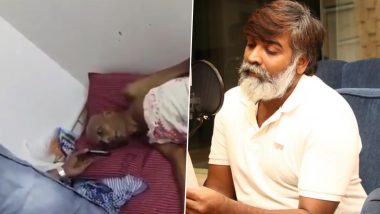 Tamil actor Thavasi has been suffering from cancer. The disease has left him unrecognisable. The actor asked for financial aid and a few key names have come forward. Earlier, it was reported that Sivakarthikeyan has extended financial support to Thavasi. Now, Vijay Sethupathi has also extended help to the ailing actor. Sethupathi has donated an amount of Rs 10 lakh to him, which was handed over by Soundara Raja, as per reports. Raja also added some amount from his side as well. Sivakarthikeyan Extends Financial Support To Thavasi For Cancer Treatment: Reports.

On Twitter, a video is going viral, where Raja has dialled up Sethupathi on his phone. The conversation between Sethupathi and Thavasi will make you tear up. Sethupathi asks him to take care of his health and not worry. Vijay Sethupathi Donates Rs 10 Lakh To Ailing Thavasi, Phone Conversation Between Two Actors Will Move You (Watch Video).

According to a report in Behindwoods.com, Sivakarthikeyan has given an amount of Rs 25000 to Thavasi for the treatment. The report further states that the amount has been handed through one of his fan clubs head named Mohan.

Thavasi, known for his roles in films like Azhagarsamyin Kuthirai and Varuthapadaadha Vaalibar Sangam, was also involved in a road mishap in September 2019. While returning with the crew after completing the shoot for a serial, the actor's vehicle met with an accident, that left him with serious injuries.

It is heartwarming to see artists coming to the help of artists in need. Earlier, artists came together to raise funds for ailing actor Faraaz Khan. But despite the efforts, he could not be saved.

(The above story first appeared on LatestLY on Nov 17, 2020 05:22 PM IST. For more news and updates on politics, world, sports, entertainment and lifestyle, log on to our website latestly.com).