Fans keep an eye on the numerous updates from the makers of Valimai. The latest buzz is about the addition of John Abraham in this Thala Ajith starrer. 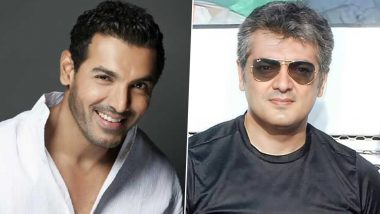 Valimai is one of the most-anticipated films of the year. Due to the lockdown imposed in the wake of coronavirus outbreak, the shooting of the film had to be suspended in March and then in September it was resumed. The film directed by H Vinoth was slated to be released during the time of Diwali last year, but due to the pandemic, the delay is seen. Fans keep an eye on the numerous updates from the makers of Valimai to know by when the shooting would be wrapped up and the film will hit the big screens. The latest buzz is about the addition of John Abraham in this Thala Ajith starrer. Valimai: This Family Pic From Thala Ajith Starrer Leaks Online; Fans Demand Makers To Share An Official Update.

According to a report in TOI, Bollywood hunk John Abraham would be playing a cameo in this action-packed drama. There has been no official updates on this yet. The report suggests that John would be seen making his entry as one of the bikers. We all know that how much John and Thala Ajith are fond of bikes and it would be a visual treat to watch the duo sharing screen space for high-octane action and bike ride sequences. Thala Ajith Starrer Valimai to Be Dubbed in Hindi?

The songs and background score of Valimai will be composed by Yuvan Shankar Raja. Bankrolled by Boney Kapoor, the makers are yet to confirm and announce the film’s new release date.

(The above story first appeared on LatestLY on Jan 13, 2021 09:44 AM IST. For more news and updates on politics, world, sports, entertainment and lifestyle, log on to our website latestly.com).