After getting delayed many times owing to the COVID-19 pandemic, superstar Ajith Kumar's much-awaited film Valimai has finally released in theatres on February 24. Check out the review round up of the movie here! 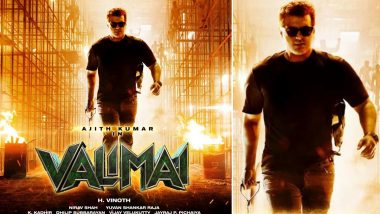 After many delays, Ajith Kumar's highly anticipated film Valimai has finally hit the big screens today (February 24). Starring Huma Qureshi and Kartikeya Gummakonda alongside the lead star, the flick is said to be filled with lots of action and thrills. Helmed by H Vinoth and produced by Boney Kapoor, the South movie revolves around Ajith as a cop who sets out on a mission to hunt down a group of biker gang who's involved in many crimes. Now, reviews of Valimai are out and they look mixed. Here, check out what critics have to say about the flick below. Valimai Movie Review: Fans Hail Ajith, Huma Qureshi, Kartikeya Gummakonda’s Action Thriller On Twitter!

News18: "Overall, the movie is only about Ajith and is a treat for every Ajith fan. Besides slow motion walks, and some scenic shots, there is nothing that the movie has to offer. Valimai translates to Strength and that’s exactly what the script and direction lacks."

The News Minute: "The stunts are indeed valimai (powerful/strong) but the film becomes a kodumai (atrocity) with its wonky script and poor characterisation. Unfortunately, that’s the final Valimai update we’re left with." Valimai Movie Review: While Ajith Kumar’s Action-Thriller Is a Major Drag, the Stunt Performers Deserve Praise (LatestLY Exclusive).

Firstpost: "Valimai does subvert some of the star vehicle tropes of Tamil cinema. First, it has a solid villain capable enough to engage the hero in a serious battle; Kartikeya is quite effective. Second, the women are not as romantic interests or sources of dramatic relief."

Hindustan Times: "Valimai is a very foreseeable film about a fearless cop bringing down a gang as a one man army. The differentiating factor is that the film uses action to its strength and rides on the adrenaline rush those sequences deliver. In an otherwise predictable and at times exhausting film, it’s the action scenes that really keeps one invested."

So, what do you think? Are you going to the theatre to watch Valimai? Tell us your view in the comment section below. Stay tuned!

(The above story first appeared on LatestLY on Feb 24, 2022 06:43 PM IST. For more news and updates on politics, world, sports, entertainment and lifestyle, log on to our website latestly.com).