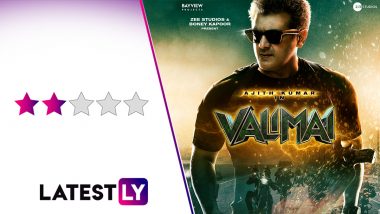 Valimai Movie Review: Valimai is a movie that is specifically stitched and sewn for Ajith Kumar fans. The movie offers not one, not two, but multiple intro shots for the Tamil superstar, slowing down time to let the audience fawn over how Ajith looks so cool in his black shades. In one of the intros, camera keeps cutting to Hindu deities to hammer home the point that Ajith's character Arjun is a saviour. As if that name isn't enough. There is also a festival song brought in right after his first intro scene, the latter in which he somehow elevates himself through the sunroof of a car. There is a perfunctory 'amma sentiment' track, and two songs about motherly love in Valimai. There are slick action scenes. And there is a social message about the ills of unemployment and drug abuse. Valimai: Ajith, Huma Qureshi, Kartikeya Gummakonda’s Power-Packed Video With Thrilling Action Sequences Is A Perfect Watch For Fans Ahead Of The Film’s Release!

So like I said before, Valimai is made for hardcore Ajith fans. Too bad, if you aren't one though. For otherwise, this is a slog of a movie!

Valimai, loosely inspired by Jackie Chan's New Police Story, is about how a gang of bikers are terrorising the city of Chennai with a spate of chain-snatching, that leads to unfortunate deaths of the victims. Even worse is their drug trade that not only recruits unemployed youth to their gang called Satan's Slaves, but also gets other youngsters addicted. To stop their menace, ACP Arjun Kumar is brought in to the city, and soon he faces off the gang's daredevil leader, Naren (RX 100 fame Kartikeya Gummakonda). The twist comes when Arjun's family is dragged into their clash, but you should have seen that coming beforehand, shouldn't you?

Valimai is an out and out Ajith one man show, designed purely to thrill his fanbase, who don't mind the excesses that comes with his superstar baggage. If you have enjoyed his films with director Siva, be it Vedalam, Vivegam, Veeram or Viswasam, Valimai might not disappoint you. This movie refuses to quit on the superstar image of the actor, often ignoring the process of editing and the mere idea of trimming a scene just so that Thala fans... oh, we are not supposed to call him that anymore na?... have their hearts' fill of seeing Ajith look smashing and do some smashing on and on and on.

The problem here is that Valimai is not made by Koratala Siva, it is made by H Vinoth whose last film with Ajith - Nerkonda Parvai - was a very smart remake of the Hindi legal drama, PINK. I had loved Nerkonda Parvai in how it adapts PINK, which while catering to Ajith's mass image, didn't compromise on what PINK stood for. Something Pawan Kalyan's Vakeel Saab never managed to get it right.

Valimai, however, for me was a big disappointment since it was coming from H Vinoth-Ajith combo, and what it brings to the table. With a bigger scale and some lavish production values, Valimai was supposed to be this slick action thriller with some stylish stunt sequences. While the action scenes do offer some popcorn entertainment, the rest of the film is a major bummer. Theatrical Releases of the Week: Alia Bhatt’s Gangubai Kathiawadi, Ajith Kumar’s Valimai, Pawan Kalyan’s Bheemla Nayak and More.

After a prolonged act establishing the Satan's Slaves' antagonism, the whole hero intro and the family scene lead to a very average first act. The police procedural sequences are weakly written and look quite amateurish. There is also some comedy insertion to tickle the front-benchers that feels quite out of place here. Like, that scene where Arjun goes to investigate a suicide case and he begins to rag upon a person there.

The hero-villain face-off scenes have some spark, but there is just way too much noise than actual substance here. The major annoyance comes from the addled family drama that not only bogs down the thriller aspect of Valimai, but also the pacing in a film that that is already frustratingly about three hours. Save for the hero, and to some extent the villain, the rest of the characters are one-note characters or poorly written cliches.

The highlight of Valimai is the much-touted action scenes. This aspect of the film is also wildly inconsistent like Ajith's changing hair colour. The stunt performers are the true stars of the film, and there are some impressive daredevilry on bikes in there. But the action choreography on the whole is sometimes stunning, sometimes lacklustre, the latter when there are close-ups involved of the actors. Or let down by the CGI, like the scene in the climax where Arjun jumps his bike from one building to another (which was also used in the teaser). The pre-interval bike chase and the post-interval highway motorcade scuffle manage to evince interest, but the climactic action sequence is boring because it just didn't know when to stop. Also, kindly don't look for any kind of logic in any of the scenes.

As for the performances, Ajith gives a very Salman Khan performance here. No, I don't mean he takes off his shirt every now and then - that task is reserved for the antagonist. But Ajith's monotonous dialogue delivery and his frequent preening for the camera, enhanced by the silliness of the proceedings, is a true 'Bhai' act. Which is a major disappointment, for we know how good an actor Ajith is with the right material. Just watch his last film before this one.

Huma Qureshi has one cool shoot in the pre-interval fight sequence, but the rest of the film has her be around Ajith's character without much to offer. There is no romantic track between them, but that doesn't make her role any better. Kartikeya Gummakonda gives quite the villain-y performance. It is a very paper-thin character with no nuance at all, but the actor's enthusiastic performance makes some amends. Raj Ayyappa as Arjun's younger brother plays a crucial part in the story, and the actor is okay. Bani J and Pearle Maaney don't have much to do.

PS: It is irksome when on one hand a Tamil film like Jai Bhim exposes custodial torture, the other hand sees the hero in Valimai break limbs of criminals in jail so that they don't engage in further criminal activity.

- Nothing Beyond a One-Man Show

Valimai is strictly a film that only caters to Ajith's dedicated fanbase, which is disappointing especially because we expect an H Vinoth movie to go beyond that base and not be a by-the-numbers thriller. A couple of stunt sequences are striking but the rest of the film is a major drag.

(The above story first appeared on LatestLY on Feb 24, 2022 02:00 PM IST. For more news and updates on politics, world, sports, entertainment and lifestyle, log on to our website latestly.com).