Sharing the new trailer on his Twitter handle, the actor wrote, "Love. Life. Family. Relationships. Bringing together all these in one super special movie." 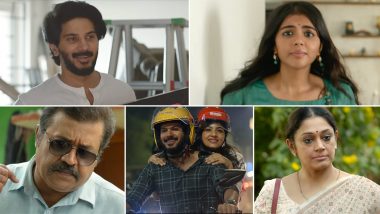 The trailer of Varane Avashyamund starring Dulquer Salmaan, Suresh Gopi, Shobana, and Kalyani Priyadarshan in the lead roles is finally here. Dulquer had taken to social media on Friday, January 31 revealing that the trailer of his next is up for release on February 1 and as promised, it is here. Sharing the new trailer on his Twitter handle, the actor wrote, "Love. Life. Family. Relationships. Bringing together all these in one super special movie. Here is the trailer for #VaraneAvashyamund releasing on the 6th of Feb in the GCC and 7th Feb all across India. So excited!!!" Confirmed! Kajal Aggarwal and Dulquer Salmaan to Share Screen Space in a Tamil Film (Watch Video).

While the teaser of the film had one of the most iconic scenes, the funny re-creation of Suresh Gopi and Shobana's iconic scene from their yesteryear blockbuster Manichithrathazhu. The trailer is full of some more amazing moments. The film deals with love, marriage and everything in between through interesting characters. Love is explored through younger as well as older characters and that is certainly the highlight.

Varane Avashyamund marks the Malayalam debut of the Hero Kalyani Priyadarshan and she looks amazing in it. The film features a great supporting cast of Urvashi, KPAC Lalitha, Lalu Alex.Dulquer Salmaan: My Hands Shake While Doing Intimate Scenes.

(The above story first appeared on LatestLY on Feb 01, 2020 06:12 PM IST. For more news and updates on politics, world, sports, entertainment and lifestyle, log on to our website latestly.com).