The production house has communicated to all the Internet Service Providers and sites that stringent legal action would be taken if the movie is copied or transmitted. 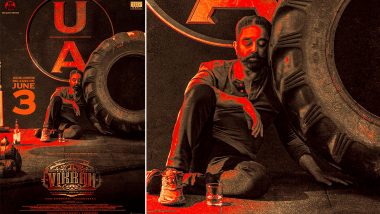 After the Madras High Court restricted Internet Service Providers (ISP) and over 1000 websites from unauthorised screening or copying of the Kamal Haasan starrer Vikram, releasing on June 3, the superstar's production house Raaj Kamal Films International is on high alert. The production house has communicated to all the Internet Service Providers and sites that stringent legal action would be taken if the movie is copied or transmitted. Vikram: Kamal Haasan, Vijay Sethupathi and Fahadh Faasil’s Film To Release on 400 Screens in Telugu States.

Madras High Court judge, Justice Saravanan had on a petition filed by R. Murali Krishnan of Raaj Kamal Films International, restrained 29 ISPs including BSNL, Vodafone idea, Airtel, and Reliance Jio and 1308 websites from unauthorised copying or transmission of "Vikram", the complete movie or in parts. The movie produced by Raaj Kamal Films International and directed by Lokesh Kanagaraj with Kamal Haasan, Vijay Sethupathi and Fahad Fazil playing major characters is all set for a worldwide release on 1000 screens on June 3. Vikram: Kamal Haasan To Promote His Upcoming Action-Thriller in Hyderabad.

The advocate of the petitioner, Vijayan Subramanian submitted to the court that when the film is released on June 3, the websites would illegally copy, record, download, reproduce, transmit, and communicate the copyright-protected movie. The applicant also said that the 1308 websites have the potential to upload and enable third parties to copy, reproduce, distribute and display the film through 29 ISPs which amounts to infringement of the applicant's copyright.

"Vikram" is one of the most awaited movies of 2022 and Raaj Kamal Films International is worried that if the movie is copied or reproduced, it would amount to major financial losses including to those with whom the producers had entered into agreements for the purpose of marketing, promotion, communication, etc.

(The above story first appeared on LatestLY on May 28, 2022 11:36 AM IST. For more news and updates on politics, world, sports, entertainment and lifestyle, log on to our website latestly.com).