Team India lost the match against New Zealand, thus being ousted from the ICC World Cup 2019. Bollywood celebs have come out to support the men in blue in this time when they need encouragement. Aamir Khan, Esha Gupta, Pooja Hegde, Sonu Sood are only a few who tweeted in suppport. 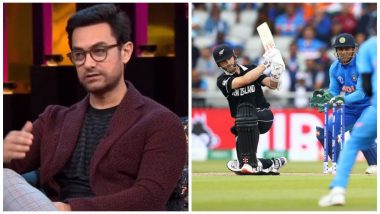 It has been a tough 24 hours for all the Indians. ICC 2019 World Cup's latest match was between India and New Zealand. On July 9, the match could not be finished due to rains and had to be postponed to July 10. Today, in nail-biting few hours New Zealand won the match and India was shown the way out of the World Cup. Fans were left petrified after Virat Kohli had to walk out of the field, but thankfully Jadeja and Dhoni's partnership showed India a glimmer of hope. The men in blue put up a brave show. They might have not won the match, but certainly won hearts for giving the match their all. Wins And Losses Are Part of Life, Tweets PM Narendra Modi as Team India Crashes Out of World Cup 2019 After Losing to New Zealand in Semi-Final Match.

It is not just us who are saying this. Twitter is flooded with words of praise for Team India. Well, of course, there is criticism also. But we are going to focus on the positive. Many Bollywood and TV celebs also took to their Twitter handle to write messages for Team India. Below are a few of them. Virat Kohli-led Team India Bow Out of CWC 2019; Heartbroken Netizens React to 18-Run Loss Against New Zealand in Semi-Final Match.

Respect and thank you team india for giving us everything. #NZvsIND

You are a true legend of the game @msdhoni, @imjadeja what a brilliant knock !!!! Sad that we a lost today but proud of our Indian Team - & many congratulations to team New Zealand on their win.

U gave ur best our heroes n we r proud of u #TeamIndia ! @imjadeja n @msdhoni u were awesome. Your efforts are tattooed on the heart of billions forever 🇮🇳 #indiavsNewzealand #WorldCup2019

The boys did make us proud, Esha Gupta

Gutted. But just wasn’t our time. The boys made us proud till the end.. 🇮🇳🙏🏽

Heartbreaking to see India lose today but #Dhoni you beauty, you proved today why you’re my favourite... he gives every match his all and he really tried hard to pull through for us...Much love and respect to our former skipper ❤️

Love and respect to our indian cricket team ALWAYS! in wins and in losses, we are with you 🇮🇳 well played boys!

#teamindia all the best for the future challenges. We are proud of you. Today was just #onebadday ! @msdhoni you and @imjadeja were so good🙏 #CricketWorldCup2019

So, those were our words of praise for the men in blue. This defeat will be tough to digest, but there is nothing that an Indian heart cannot forgive. More power to you Team India. Better luck next time.

(The above story first appeared on LatestLY on Jul 10, 2019 09:10 PM IST. For more news and updates on politics, world, sports, entertainment and lifestyle, log on to our website latestly.com).