200 Halla Ho: Saloni Batra Opens Up on Why She Feels Her Upcoming Film Is Relevant in Present Times

Saloni Batra, who is all set to feature in the upcoming digital film '200 Halla Ho', has opened up on why she feels her film is relevant in present times. Saloni feels the film will serve as an inspiration to many. The film is slated to release on August 20 on ZEE5. 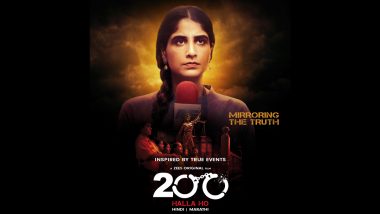 Actress Saloni Batra, who is all set to feature in the upcoming digital film '200 Halla Ho', has opened up on why she feels her film is relevant in present times. Sharing what the film talks about, Saloni said: "Our film is inspired by true events. It talks about injustice in our society against women, the patriarchal streak that exists, the kinds of problems that women face for merely being that gender and on top of that there is caste oppression. The kind of injustice these women face is truly brutal and even in order to speak the truth, they go through a lot." Rinku Rajguru Opens Up About Her Upcoming Film 200 Halla Ho, Says ‘It’s Time We Raise Strong Voice Against Brutality on Dalit Women’.

Throwing light on her character in the film, the actress added: "My character's name in the film is Purva Shahane. Hailing from Nagpur, she is an activist, journalist, fiery, confident and has a flair about herself. Purva is well aware about what and how she works. She is willing to fight for these women. She takes her job very personally like it's her responsibility to bring justice to them." 200 Halla Ho Trailer: Rinku Rajguru, Barun Sobti, Amol Palekar’s Intense Legal Drama Raises Strong Voice Against Caste Oppression and Injustice (Watch Video).

Saloni feels the film will serve as an inspiration to many. She said: "These women conquer and stand up for themselves and it's quite a relevant story. I feel and hope it'll inspire a lot of women to stand up and speak. I hope it makes people feel the need to empathise and put a stop to these brutal injustices happening against women even in the most tiny matters."

Quizzed why '200 Halla Ho' is relevant in the present time, the actress replied: "The film is based on a true incident. Inspired by what happened in Nagpur, it talks about injustice against women in our society, caste oppression and how men degrade women. It's about a lot of social issues that need to be addressed and are the need of the hour, so this film is quite relevant in that sense."

"It's high time that women are treated as mere human beings and not discriminated against men on the basis of sex, caste or anything. I feel people really need to work on this as a society. It's just really sad that we women have to go through this time and time again and the injustice doesn't stop," she further said. Written and directed by Sarthak Dasgupta, '200 Halla Ho' features Amol Palekar, Barun Sobti, Rinku Rajguru, Sahil Khattar, Saloni Batra, Indraneil Sengupta, and Upendra Limaye. The film is slated to release on August 20 on ZEE5.

(The above story first appeared on LatestLY on Aug 15, 2021 05:21 PM IST. For more news and updates on politics, world, sports, entertainment and lifestyle, log on to our website latestly.com).