Bigg Boss 14 House Photos Leaked? Here Is a Tour of the New Residence for the Contestants [View Pics Inside] 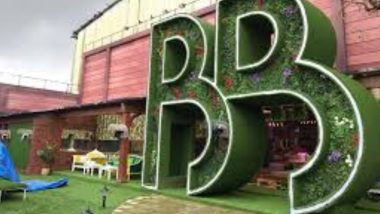 The closer the premiere date to Bigg Boss 14 comes, the longer the wait seems. So far the only confirmed thing about the show is that Salman Khan will be hosting it as usual. If things had been normal, there'd been a house tour for the journalists before the show began. But due to the coronavirus outbreak, the chances of this tour happening seem bleak. We will have to wait for the channel to launch the pics. Unless, someone was sneaky enough to get the pics and leak on the internet. Well, a set of pictures claiming to be Bigg Boss 14 house pics are gaining popularity on the internet. Bigg Boss 14: Hina Khan Says She Was the Winner Without the Trophy in New Promo of Salman Khan's Show (Watch Video).

In the leaked pics, we see the living area, from where the contestants will interact with the hos. We also get a glimpse of the lavish bedroom and the dining area. Once again, the makers of Bigg Boss 14 have gone for gaudy, bright colours as if kindergartners were let loose inside the house with acrylics. There is not an iota of simplicity, uniformity or grace in the decor. Bigg Boss 14: Gauahar Khan Is Changing the Game in the New Promo of Salman Khan's Show (Watch Video).

Check Out The Leaked Pics of the Bigg Boss 14 House Here:

Bigg Boss 14 will premiere on October 3. Rumour has it, Sidharth Shukla, Hina Khan, Gauahar Khan - all former contestants - will enter the house as guests. They have also featured in the promos of the upcoming season, without dropping a hint about their capacity of involvement. Pavitra Punia, Nishant Malkani, Indeep Bakshi, Karan Patel, Sneha Ullal, Jasmin Bhasin are rumoured contestants. Neha Sharma and Ajey Nagar have clarified that they won't be on the season.

(The above story first appeared on LatestLY on Sep 20, 2020 11:31 PM IST. For more news and updates on politics, world, sports, entertainment and lifestyle, log on to our website latestly.com).