Bigg Boss 14: Hina Khan Says She Was the Winner Without the Trophy in New Promo of Salman Khan's Show (Watch Video) 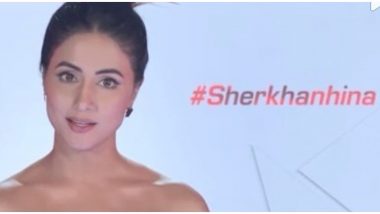 Bigg Boss 14 has launched a series of new promos. In one of those, Bigg Boss 11 runner-up,  Hina Khan, makes a dazzling appearance. "Bagair trophy jeete ban gayi winner," Hina claims in the promo of the Salman Khan hosted reality show. Umm...what she says is sort of true. Don't you think? Right from the first week of Bigg Boss 11, Indian viewers were divided into two factions - Tea Hina Khan and Team Shilpa Shinde. Although, Shilpa ultimately lifted the trophy, it is Hina who has gained the most after that. She has been to the Cannes, featured in movies, starred as Komolka in Kasautii Zindagi Kay and just added more and more fans to her fandom. Bigg Boss 14: Gauahar Khan Is Changing the Game in the New Promo of Salman Khan's Show (Watch Video).

Rumour has it that Hina Khan along with Gauahar Khan and Sidharth Shukla will return as guests on Bigg Boss 14. Or maybe these rumours simply surfaced because all three of them shot for promos of the new season. And they might simply be there for promotions. We'd like it more if they actually joined the new show. BTW, promos featuring Sidharth and Gauahar are also out now. Bigg Boss 14: Sidharth Shukla Reveals His Winning Strategy in New Promo of Salman Khan's Show (Watch Video).

Bigg Boss 14 will premiere on October 3 with Salman Khan returning as the host for the umpteenth time. The show is produced in the middle of a pandemic. In fact, the theme of the new season is "Bigg Boss dega 2020 ko jawab". So, lockdown will play a major role. If reports are to be believed, the new season will remind the contestants of a pre-locdown life, meaning there will be spa, salon, and mall in the premises of the new house.

(The above story first appeared on LatestLY on Sep 19, 2020 09:20 PM IST. For more news and updates on politics, world, sports, entertainment and lifestyle, log on to our website latestly.com).