Bigg Boss 14: Naina Singh Lashes Out At BB14 Makers, Says Her Eviction Was 'Pre-Planned' and 'Unfair'

"Don't show me in a wrong light, at least, tell my side of the story also. Telecast the things that I spoke. They have just shown me as one 'Bimbo' who has done nothing on the show," lashed out Naina at the makers of Bigg Boss 14. 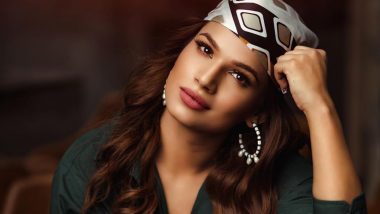 Kumkum Bhagya fame Naina Singh was evicted from the Bigg Boss 14 house two weeks back. Even though her entry was smashing and promising (atleast Naina's words were before she entered BB14), her stay was not that eventful apart from her first task as a sanchalak and her fight with Eijaz Khan. And now, the actress has blamed the makers for her exit. [Exclusive] Bigg Boss 14 Wild Card Naina Singh: 'Nothing More Valuable Than Being Real'.

Yes, as per Naina, the makers did not show her fun side and her opinionated side and also her performance in tasks and painted her as a 'bimbo'. "Everyone wants to play the game according to them. Someone plays using the sympathy card, victim card. But what I really hated about my journey was whatever I spoke about my personal life about the mask task, it was not shown," revealed Naina to Bombay Times. Bigg Boss 14 Weekend Ka Vaar November 8 Episode: Salman Khan Calls Out Pavitra Punia and Nikki Tamboli, Naina Singh Gets Eliminated - 5 Highlights of BB14.

She continued, "In that house at some point or the other everyone is talking about their personal life, but they chose to show that Naina is only bothered about makeup, expensive dresses and has a house. Do they know about my struggles, whether I was in depression or not? Do they know how I have managed to reach so far in the day? If makers were showing Eijaz, Shardul's struggle and personal life, why did they choose to ignore my side of the story?"

"Don't show me in a wrong light, at least, tell my side of the story also. Telecast the things that I spoke. They have just shown me as one 'Bimbo' who has done nothing on the show," lashed out Naina.

Naina also revealed an incident where upon her entry she had warned Nikki Tamboli to not hurt her physically during tasks like she did Sara Gurpal. "Just imagine if I had the guts to scold Shardul Pandit in front of Salman Khan, do you really think I wouldn't do anything on the show. I had clearly told Nikki Tamboli when I had entered the show that you hurt Sara Gurpal's eyes during the task, if I even get a scar on mine, I will make things bad for you, that was also not shown. I said this just after my entry," said Naina.

Naina also alleges that eviction was pre-planned. She says, "I feel my eviction was pre-planned by the makers. They got me into the show, to take me out of the show in such a manner. I don't know if there was any personal vendetta or not, but my eviction was totally unfair. They kept me in quarantine for three weeks and wasted my entire month trying to evict me like this. When my hashtag #BringBackNaina was trending, I was very sure I didn't want to go back. I got evicted in two weeks and when I came out I saw what had been shown, so it's better I don't waste my time."

"Whatever work I was going to do after Bigg Boss three months later, I can do that now also. No Bigg Boss can stop me, I've received so many threats in my life and nobody can stop me. I will do what I want to do whether I am doing Bigg Boss or not," she concluded.

(The above story first appeared on LatestLY on Nov 20, 2020 11:43 AM IST. For more news and updates on politics, world, sports, entertainment and lifestyle, log on to our website latestly.com).