Bigg Boss 14's eliminated contestant Sara Gurpal was hurt by Nikki Tamboli's acrylic nails during a task and the pictures of the singer's injury are now all over the web. 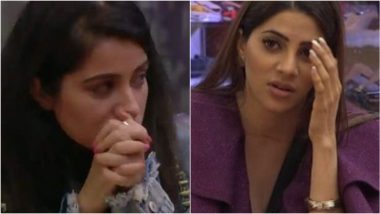 Punjabi singer and actress Sara Gurpal became the first contestant to get evicted from Bigg Boss 14. It was the seniors namely Hina Kha, Sidharth Shukla and Gauahar Khan who unanimously decided to kick her out of the show as the trio thought she was undeserving. Netizens even had shown their displeasure over toofani seniors decision to eliminate Sara. However, now a few reports also hint that she left the reality show due to an injury. After the same, even photos of Gurpal's eye injury has been all over the internet. Bigg Boss 14: Sara Gurpal Gets Evicted by Seniors Hina Khan, Gauahar Khan and Siddharth Shukla.

Sara was hurt inside the house by none other than Nikki Tamboli. It was during the bulldozer task when Tamboli was torturing Sara and with an aim to grab her seat, she injured the latter's eyes with her acrylic nails. This particular scene was chopped from Bigg Boss' main episode. However, the contestants were seen talking about it. Sara Gurpal in Bigg Boss 14: Tu Chahida, OK Bye and More – 7 Songs of the Punjabi Singer-Actress That You Should Tune to ASAP!

Also, another reason for Sara's eviction maybe her now out marital status. A man named Tushar Kumar had earlier claimed that he is married to the singer for about 5 years. The lad also accussed her for marrying him for green card. Well, whatsover, all we wish is Sara gets the best treatment and recovers soon.

(The above story first appeared on LatestLY on Oct 14, 2020 04:52 PM IST. For more news and updates on politics, world, sports, entertainment and lifestyle, log on to our website latestly.com).