Broken But Beautiful Season 2 Review: Vikrant Massey and Harleen Sethi’s Twisted Love Tale Will Undo the Knots of Your Heart! 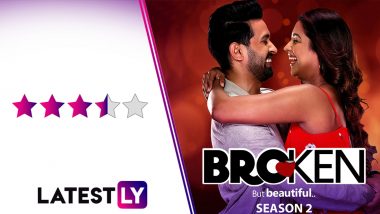 For some, love is a tender feeling, for others, it’s a beautiful journey. Then there are some for whom it’s a lifetime of a learning experience. And if you are the one who has fallen in ‘pyaar’ at least once in your life, Harsh Dedhia’s web-series Broken But Beautiful 2 streaming on ALT Balaji is the show you need to binge-watch this weekend. In season one of the same series viewers saw a dramatic end wherein Veer (Vikrant Massey) and Sameera (Harleen Sethi) who were destined to be together, part ways for their own good. With this cliffhanger, audiences were desperate to know what will happen in Veer and Sameera’s lives ahead. And well, the answer to this one lies in Broken But Beautiful season 2. Broken But Beautiful Song Teri Hogaiyaan: Vikrant Massey and Harleen Sethi's Latest Track Hits All the Right Chords (Watch Video).

First things first, if you happen to be a fan of Indian love stories, ones that come with a few twists here and there, you might literally like this one. Broken But Beautiful 2 starts with the same old characters, Sameera and Veer in a conversation, wherein they discuss not to be in touch with each other anymore. From thereon their lives take a 360-degree turn. Veer moves to Bengaluru for work prospects, whereas Sameera has transformed from a meek girl-next-door to a sassy chic who believes in self-love. But the boom element in the tale is that both the ‘broken’ hearts are no more single. There’s Debbie (Anuja Joshi) in Veer’s life and Ahan aka Mushroom (Gaurav Arora) in Sameera’s.

Veer and Sameera are happy in their individual lives, until one day the two cross paths and get the ‘dhak dhak’ feeling. The two cordially meet and greet others and from hereon the drama begins. Veer and Sameera in their own mind start picking flaws in the opposite’s relationship. While Sam feels that Veer suffocates his girlfriend Debbie by his behaviour, Veer feels that Sam-Ahan’s love is unrealistic and lacks the spark. At one point, Veer also tries to get Sameera back in his life but faces rejection which leads to the lad being ‘broken’. Broken But Beautiful Season 2 Trailer: Vikrant Massey and Harleen Sethi’s Intense, Romantic Web-Series Is Sure To Be On Your Binge-Watch List.

In a nutshell, with stretchy episodes, heartaches and a perfect shaadi mistake, viewers will be glued to this one. Having said that, the show does have a drawback — the plot is predictable. It does not make you curious as to what will happen next, as you sort of know the answer already. Coming to the performances, Vikram Massey is the star of the series, followed by an immensely impressive performance by Harleen Sethi. In fact, at the start, the show looks as if it’s a leaf out of Sethi’s real-life break up with her long-time boyfriend, Vicky Kaushal. Anuja Joshi (Debbie) and Gaurav Chopra (Ahan) try their best to act and do a fair job in the acting department. The series also sees Pooja Bhamrah, Mukul Chaddha and more. Ekta Kapoor Gets Candid On Her Broken But Beautiful Cast Member Pooja Bhamrah.

Last but not least, the most intriguing part of this Ekta Kapoor web show is its soulful music. Broken But Beautiful Season 2 serves you melodies which are soothing and how. Whenever a song or background tune plays, you get transported in a different zone altogether. Well, costumes is another department that catches the eye. The team has done an extremely fabulous job in the style department too.

(The above story first appeared on LatestLY on Dec 04, 2019 10:03 AM IST. For more news and updates on politics, world, sports, entertainment and lifestyle, log on to our website latestly.com).