Television broadcast organisation CBS has renewed its two multi-cam comedies US of Al and B Positive for second seasons. The two shows hail from Chuck Lorre Productions, which has three different shows on CBS as of now. 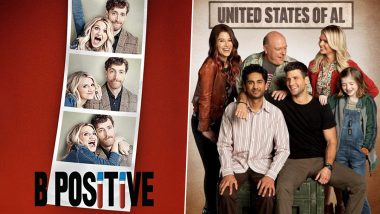 Poster of B Positive and United States of Al (Photo Credit: File Image)

Television broadcast organisation CBS has renewed its two multi-cam comedies 'US of Al' and 'B Positive' for second seasons. As indicated by Variety, the two shows hail from Chuck Lorre Productions, which has three different shows on CBS as of now. The shows incorporate the Allison Janney led multi-cam 'Mom,' which as of late finished after eight seasons. The others are 'Bob Hearts Abishola' and 'Young Sheldon.' The previous was renewed in February while the latter scored a three-season pickup in March. Good Fight Season 5: Cush Jumbo AKA Lucca Quinn Exits CBS' Legal Drama.

'US of Al' chronicles Riley (Parker Young), a Marine battle veteran attempting to readjust to regular citizen life in Ohio, and Awalmir, or Al (Adhir Kalyan), the translator who presented with Riley's unit in Afghanistan who has come to begin a new life in America. The arrangement additionally stars Elizabeth Alderfer as Lizzie, Riley's sister; Dean Norris as Art, Riley's dad; Kelli Goss as Vanessa, Riley's ex; and Farrah Mackenzie as Hazel, Riley and Vanessa's daughter. 'United States of Al' was made by David Goetsch and Maria Ferrari. Both executive produced alongside Chuck Lorre, Reza Aslan, and Mahyad Tousi. The series is produced by Chuck Lorre Productions in association with Warner Bros. TV. Clarice: CBS Sets Premiere Date for Silence Of The Lambs Sequel.

'B Positive' is the account of Drew (Thomas Middleditch), a therapist and recently separated father who is confronted with discovering a kidney donor when he runs into Gina (Annaleigh Ashford), a rough-around-the-edges woman from his past who volunteers her own. Together, they structure a far-fetched and life-affirming friendship. The series also stars Kether Donohue, Sara Rue, Izzy G., Terrence Terrell. Marco Pennette made the series and executive produces alongside Lorre. Once more, Chuck Lorre Productions produces in association with WBTV.